SeniorAdvisor.com Blog > Blog for Families > Independent Living > How Do You Start a DIY Senior Housing Co-op?

How Do You Start a DIY Senior Housing Co-op? 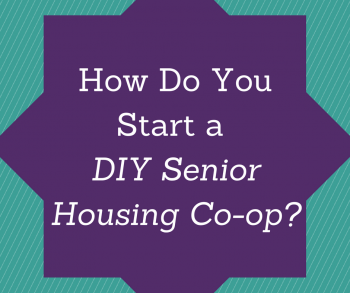 A group of London women got press attention recently for the senior housing co-op they started. The New Ground Cohousing project won an award for its design and praise from the media for promoting healthy socialization and independence among its senior residents. Two dozen women now enjoy the results of eighteen years of work to bring the project to life. So how do you start a DIY senior housing co-op? Here’s how they did it.

Shirley Meredeen told The Telegraph she was inspired by a co-housing workshop she attended in 1998 and by seeing women who found themselves lonely and isolated in their later years. She founded a group of like-minded women—the Older Women’s Cohousing Project – and consulted with a researcher who studied co-op housing in the Netherlands. Based on her findings, they decided their co-op would have individual entrances to apartments and private quarters, plus a community kitchen, dining area, living areas, and a garden.

They also thought about accessibility and adaptability, to insure they could live independently for as long as possible. As with co-op buildings in New York City, residents would choose new members. And although residents would contribute to common-area chores, the group was very clear that the co-op would not be a commune and that each resident would be independent and have privacy.

The Guardian reported that for the Older Women’s Cohousing Project, finding the right site turned out to be one of the biggest hurdles to getting their co-op built. A five-year timeline ended up taking much longer. The group, whose members changed over the years, had to work with town planners who focused on family housing rather than senior housing. They also had a hard time finding affordable property near community amenities.

The group finally found a location in suburban London. In December 2016, residents finally moved into their new senior co-op. Getting a cohousing project done, one woman told The Guardian, is “not for the fainthearted,” but for members, the opportunity to be social and independent was worth the work.

Is there senior co-op housing in the US?

Senior co-op housing isn’t as common in the US as independent senior living, but senior co-ops do exist. For example, the Gramercy Park Cooperative in Rochester, Minnesota, is open to residents age 62 and older and includes an onsite library, flower gardens, and free van transportation around town. The Laurelmeade Cooperative in Providence, Rhode Island, includes 40 apartment styles and 23 acres of grounds next to the Seekonk River. Residents retain their independence while enjoying the community woodworking shop, pool, and café.

If you don’t want to start your own co-op and there are no co-ops near you, consider independent living communities. They give residents a balance of privacy and social options, but residents don’t share chores. If you visit independent living locations to see if they’re right for you, take along our retirement living checklist to keep track of the lifestyle, location, staffing and pricing questions you’ll want to ask.