Broncos vs. Panthers – Superbowl Fans, Where Should You Retire? 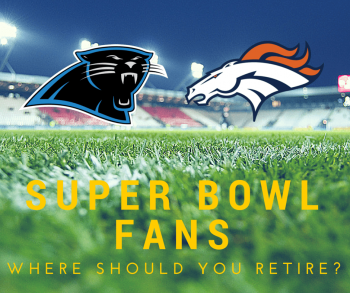 As Panthers and Broncos fans gear up for Super Bowl 50 and sports commentators pore over each team’s strengths and weaknesses, we at SeniorAdvisor.com pondered another question. Which NFL team’s hometown is a better place to retire? We’ve reviewed each city’s roster and stats and found that the competition for retirement-destination bragging rights may be closer than the contest on the field.

Denver’s the stronger contender (when it comes to retirement living)

Carolina is the odds makers’ favorite to win this year’s Super Bowl, but Denver looks like the favorite among places to retire. Bankrate.com ranked Denver the 6th best US city for retirement living, while Charlotte is listed at 131st.

What makes Denver so appealing to older adults? Bankrate cited low taxes and good scores for walkability, healthcare, wellbeing and weather. (Denver enjoys 245 sunny days per year, a July average high of 86 and a January average low of 22). According to Forbes, the cost of living is 6.7% above the national average and Denver’s median home price is $261,000, but for people who like the outdoors and active living, the price of life in Denver is money well spent.

Charlotte’s the retirement underdog (but what an underdog!)

Bankrate called Charlotte’s weather and healthcare “average” and its scores for wellbeing and walkability “below average.” But one big advantage Charlotte has over Denver is its lower cost of living. Forbes pegs it at 1.3% below the national average, and the median home here costs $161,000—a cool $100,000 less than in Denver. Kiplinger also gives the low cost of living a thumbs-up, and it likes Charlotte for its 200+ days of sunny weather each year, its thriving museum and gallery district, and easy access to major medical centers. In fact, Kiplinger didn’t even include Denver in its 2015 top 10.

Of course, in any competition, many factors can make or break a team (or a city’s retirement appeal). Here are some of the issues that may come into play, depending on what you need and want.

The Queen City hosts the largest Pride event in the Carolinas each August. Organizer Charlotte Pride is one of the Southeastern US’s largest LBGTQ organizations, and works to advance trans, Latino and interfaith LGBT causes.

In Denver, SAGE of the Rockies provides support for seniors at the GLBT Community Center, and the Center and local governments maintain a directory of local LGBT senior resource providers. On LGBT issues, Denver may have a slight edge over Charlotte, but both cities are strong in this area.

Denver sits beside the Front Range of the Rocky Mountains, which is part of a network of national forests that stretches north to south through Colorado. Pawnee National Grassland nearby offers birding and hiking on flatter ground.

Charlotte wins with beachgoers. The city is a 3.5-hour drive to Myrtle Beach, SC. Denver residents who want to swim in the ocean face a 16-hour drive to San Diego, CA or Galveston, TX.

Legal marijuana could be a game-changer for some people. As more Baby Boomers retire, they may choose the Mile High City to revisit their counterculture days—or to use legal marijuana to treat health problems. Charlotte isn’t even in the game on this one.

We won’t know until after the game whether Charlotte or Denver will be the home of Super Bowl 50 champions. Either way, you’re looking at cities with strong teams, devoted fans, and their own unique retirement bragging rights.

Compare your retirement options at the links below: