Why Do Women Live Longer? 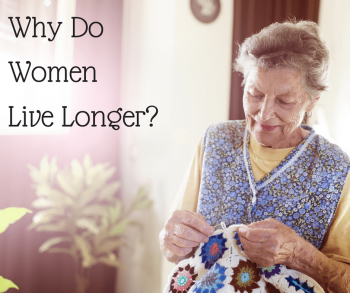 A lot of people wonder what’s behind living a long life. Researchers have long sought to understand what makes people live longer than others based on factors like genetics, lifestyle, or geography.

But one factor seems to influence longevity all around the globe: gender.

In different places and cultures, for as long as people have been keeping a record of average life spans, women have consistently outlived men*. While the specifics of how much longer women live can vary based on a number of different details, women live about 5% longer than men on average. And they’re more likely to make it to the highest age ranges humans have known. Women make up a full 90% of the people who live to 110 years

In spite of research performed over the years to try to pinpoint why a gender difference in longevity exists, scientists still really don’t know. They have posited a number of different theories though that could help explain the difference.

A lot of the diseases that eventually lead to death, particularly those influenced by heart health like heart attack and stroke, don’t usually affect women until they’re in the 70s or 80s. In men, for contrast, these diseases typically start to develop while they’re in their 50s or 60s. That means while cardiovascular disease may kill seniors of both genders at similar rates, women won’t be lethally affected until later in life.

This is probably the one theory on this list that doesn’t provide much room for doubt. Obviously a heart attack at 60 is likely to lead to an earlier death than one at 75. But recognizing that heart disease doesn’t hit as early for women still doesn’t answer the bigger question people have: why? If a slower onset of cardiovascular disease is a symptom, what’s the cause?

One of the most significant biological differences between women and men is the many years women spend menstruating. It makes sense for something so physically significant to have a larger effect, and some scientists suppose that effect could be behind the difference in life expectancy.

For one thing, menstruation leads to lower levels of iron. While a certain amount of iron is important, too much can lead to an increase in the damaging free radicals that are believed to contribute to aging our cells. Research has shown that diets high in red meat – one of the main dietary sources for iron – lead to higher rates of heart disease. While tying that research back to different iron levels in men and women due to menstruation is a clear case of using correlation in an attempt to understand causation, it at least lends some possible credence to the theory that menstruation could play a role.

Another theory researchers have posted based on menstruation is the “jogging female heart” hypothesis. One of the goals of cardio research is that it brings your heart rate up, which enhances heart health. Researchers have found that one of the effects of menstruation is an increase in heart rate during the second half of the menstrual cycle. Without doing anything other than experiencing the menstruation that comes naturally, women could be getting a health benefit similar to the effects of exercise during this time. Month after month of menstruation and this increased heart rate that comes with it could therefore little by little add up over the years to a much stronger heart by the time a woman reaches her senior years.

One of the more common theories scientists have explored is the possibility that having an additional X chromosome makes all the difference. A convenient double ensures that any issues women have with one chromosome isn’t as big of a deal. When one X chromosome experiences some type of damage, the body still has the second one to fall back on.

Essentially, women have a built-in backup their bodies can lean on anytime a gene proves faulty. As such, they have a greater ability to fight off disease and damage than men’s bodies do.

Another factor that could play a role is the higher dose of testosterone that men get throughout their lives, but particularly in their late teens and early 20’s. There are a couple of different theories related to how testosterone could influence life span.

First, around the time they hit adolescence and for a few years after, men experience a surge in testosterone. This causes an uptick in risky behaviors; from those that offer a relatively mild risk like not wearing a seat belt, to more serious behaviors like starting fights. A good number of men come out on the other side of those years intact, but not all do. The higher risk of death that comes with such risky youthful behavior certainly contributes to the overall averages, but it can also lead to behaviors that have long-term health or risk effects like smoking or drug addiction.

Some research suggests the testosterone itself could be the culprit though. Researchers that looked to history for an explanation performed an analysis of the lifespan of eunuchs who were castrated before puberty. The sample set studied, which included eunuchs in Korea in the 19th century, showed that they lived an average of 15-20 years longer than other men. In fact, they were 130 times more likely to reach the age of 100 than other men in the community.

The researchers surmised that the lower incidence of testosterone that comes with castration before puberty must have played a role in why the eunuchs were able to live so much longer than the other men in Korea of the time period. Other studies that looked at the longevity of eunuchs in different times and places also found similar trends, if not always as pronounced, suggesting the relationship between testosterone and lifespan bears weight.

One final theory that seems to account for at least some of the difference (although not all of it) is a common difference in lifestyle. Men smoke more on average than women. They typically don’t eat as healthy. And some argue that they’re not socialized to deal with stress as well (which is a hard assertion to find evidence for).

All of those factors have a big effect on heart disease, which is what ultimately ends up getting a lot of seniors in the end. As such, a tendency to partake in these behaviors at higher rates can predictably lead to an earlier death.

Lifestyle habits likely don’t tell the whole story of why women usually live longer than men, but they’re a reminder that at least part of the power of how long we live lies in our own hands. Healthier habits can ward off a lot of the disease and health issues that most commonly lead to death. While you can’t control which chromosomes you have, you can choose whether you smoke, exercise, or eat healthier.

We don’t know the secrets to a long life, but we do know the not-so-secret ingredients to increasing our likelihood of living longer. Embracing healthier habits doesn’t mean a guarantee of living to 110, but it can mean warding off the diseases that are likely to kill you sooner for longer.

*Note: For the purposes of this post, discussion of women and men refers to cisgender uses of the terms. Most of the research and theories referenced look at correlations as they relate to birth sex.

What Do Multi-Generational Homes Need to Do for Fire Safety?
How Do You Start a DIY Senior Housing Co-op?