SeniorAdvisor.com Blog > Blog for Families > Did Agatha Christie Have Alzheimer’s?

Did Agatha Christie Have Alzheimer’s? 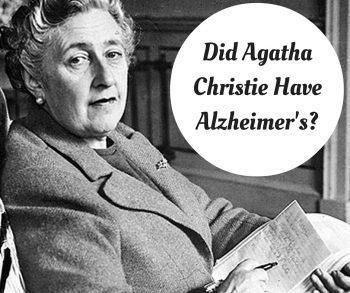 Alzheimer’s was definitely around before people starting calling it “Alzheimer’s.” Even once it had a name and definition, doctors didn’t immediately begin to recognize it for what it was. It takes some time for a new diagnosis to catch on.

We can therefore presume that many people experienced Alzheimer’s without ever receiving a proper diagnosis. In many cases, those people simply kept on living life – likely chalking the symptoms up to the onset of old age.

Many historians and literature lovers suspect that the great writer Agatha Christie may fall into that category.

Even if you haven’t read one of her books, you almost certainly know Agatha Christie’s name. She’s earned the title of bestselling fiction author of all time. Her books have been made into over 30 different movies in multiple languages and have inspired multiple TV shows, graphic novels, and video games to boot.

She wrote over 80 books, all of them focused on a central mystery that the characters (and especially perceptive readers) must solve. The New Yorker has called her The Queen of Crime.

All that adds up to a pretty impressive reputation. You’d be hard pressed to argue that she didn’t possess a great mind for ideas and puzzles. Yet like the rest of us, she was human and not immune to the disease that’s affected millions of other seniors as well.

The Evidence in her Novels

Although as far as we know, no doctor provided Agatha Christie with an Alzheimer’s diagnosis in her lifetime, researchers in the years since have found what they believe to be compelling evidence that she suffered from the disease. Their evidence doesn’t have anything to do with her behavior in those later years – it’s all in the pages of her books.

A researcher at the University of Toronto with experience studying the language used by a number of prominent writers, including Shakespeare and Milton, turned his attention to Agatha Christie in the 1990’s.

He ran her books through a software program that analyzed which words are used and how frequently. He found that there was a significant shift in her writing in the later years.

Little by little, as she aged into her late 70’s and 80’s, the variety in words she used decreased and the frequency with which she repeated words and phrases increased. This evidence suggests a drop in her vocabulary – she had anywhere from 15-30% fewer words at her disposal when writing than in those early years.

A reduction in vocabulary is a common symptom of Alzheimer’s patients, which led the University of Toronto researchers to conclude that Agatha Christie did, in fact, have Alzheimer’s.

While Christie may not have received a clear diagnosis, she certainly noticed that something was up. Her final book, the one that most markedly demonstrates a decrease in her vocabulary, was titled Elephants Can Remember. The story of this last novel focuses on a female novelist who struggles with memory problems – part of what fuels the mystery is her inability to remember events of the past.

While the work isn’t remembered fondly by fans and critics, it perhaps touches on something more personal than many of her other works. Christie’s great mind may have started to slip into the confusion and frustration of dementia, but she stayed self-aware enough to provide us with some semblance of her experience in the story of her final novel.