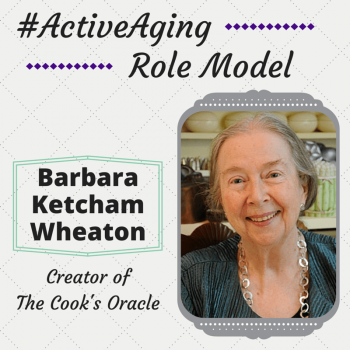 Can you imagine reading 3,400 books by more than 6,000 authors? Now add the fact that you’re not reading works of fiction, but cookbooks – some as old as the 14th century, written on vellum. And after you read them, you must log them into a database and categorize them by key ingredients.

Maybe it doesn’t sound fun, but it is definitely fascinating. Today’s Active Aging Role Model Barbara Ketcham Wheaton has spent more than 50 years on an impressive labor of love she calls “The Cook’s Oracle,” a database in which she hopes to record every recipe, ingredient and technique in all of the cookbooks published in America and Europe. So far, she’s collected 130,000 enteries into her database, which originally started on a hard copy card system, then moved to a PC in the 80s, finally landing in Microsoft Access.

At age 84, Wheaton is an author and lecturer, and has served as the honorary curator of the culinary collection in the Schlesinger Library at the Radcliffe Institute for Advanced Study at Harvard University since 1990. This collection holds more than 20,000 books on cookery, foodstuffs, and the history of cooking and eating.

She explains that she was inspired to start her database when once looking through multiple very similar but still different recipes for blancmange recipes (in four different languages no less). She struggled to understand the differences and similarities between the recipes, and could only begin to wrap her mind around them after drawing a dinner table on a piece of paper, drawing the various recipes in different spots on the table, and referring back to it as she read through her research.

Wheaton began to wonder if there was a way to find commonalities and categories within the plethora of recipes stretching from medieval times to the 20th century, and if, by watching the evolution of cooking, one could learn more about the society of that time itself, and the people that used the cookbooks. She envisioned a database that would allow a cook to search through every apple pie recipe ever written, every technique, every flavor combination.

As predicted, she began working though the cookbooks to see depictions of the world of the book’s time, including concerns of chefs, flavors contemporaries enjoyed, and even hints to the books’ target audiences and their whereabouts. She soon realized that her database would provide a “complex kaleidoscope” of what food has meant to people for centuries.

For example, recipes in an old cookbook often speak volumes about the life of the people who would be reading it, and often also offer solutions for common household problems, remedies for various sicknesses, and ways to solve contemporary problems (like the 1970s cookbook completely focused on making the most of affordable items to support a household budget).

Interestingly, many of the very old generations were not able to preserve many cookbooks, as many recipes were handed down verbally to younger generations. Today, so many of the world’s recipes live online or in social media. Wheaton’s database truly may be impossible to complete, but her work and energy pay off to offer a glimpse into the evolution of food and cooking.

Sources say that Wheaton is looking for someone to eventually take over the database and help make it available to the public, but in the meantime, she continues her work, carefully reading, recording, sorting the favorite recipes of chefs, housewives, and families for centuries.

Cashing in Your Life Insurance: The Pros and Cons
Hogewey Dementia Village: The New Innovation in Dementia Care