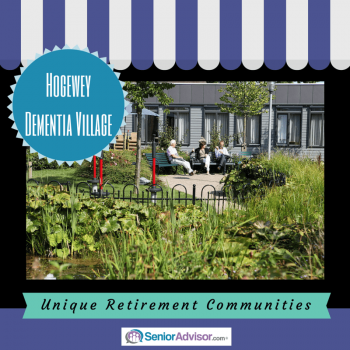 With a listing of all the senior living options in North America, SeniorAdvisor.com’s in a good position to spot those doing something special. In our monthly Unique Retirement Communities series, we feature senior communities doing something that stands out from the pack. This time, we take a look at Dementia Villages!

The need for dementia care is on an upward trajectory. One in three seniors will have Alzheimer’s or another form of dementia by the time they die. Combine that fact with the projected growth of the senior population and we have an issue set to tax our current healthcare and senior care systems significantly.

The big picture here matters, but more importantly, there are real seniors behind those stats. A large number of people who have lived long lives and gained a community of people who care about them in that time are facing the likely prospect of a scary and often debilitating disease. Their families must struggle with providing them the care they deserve, trying to find the tricky balance between what’s plausible and affordable and what’s best for their quality of life.

Part of what scares people about the onset of dementia is the loss of independence that comes with it. The idea of a life that exists almost entirely within the walls of a nursing home is difficult for many seniors to swallow. But the level of care dementia requires often makes assisted living and nursing home care a necessary choice for families.

As the numbers grow, people are starting to get creative and try out different care options. One promising new idea is starting to get global attention: dementia villages.

What is a Dementia Village?

A dementia village is a like a small town that happens to be filled with people suffering from dementia. They can go about their day as they normally would – shop, get their hair done, live their lives – but all the time, there are caregivers on staff keeping an eye on the residents. A dementia village provides all the care that a dementia patient would get in a nursing home, simply in a new environment designed to feel like a normal town.

Seniors have the freedom to go wherever they like, as long as it’s within the confines of the village where trained professionals can keep an eye on them. That way if they have any immediate health needs, someone is there to notice and tend to them, but the rest of the time they can feel like they’re simply living life as usual.

Can That Really Work Though?

It does and it has. The idea was first developed and tested in the Netherlands. Hogeweyk, the first dementia village, was set up in 2009 and has been functioning without problem ever since. The village was designed to include many of the things that would make it feel more familiar to patients: a grocery store, restaurants, a garden, and a theatre. Residents have plenty to keep them occupied, lots of other people around to socialize with (both other patients and caretakers), and don’t have to deal with the sense of confinement that can come with life locked down in a nursing home dementia ward.

The success of Hogeweyk has piqued the interest of other countries. The people who helped build it have begun consulting with other communities around the world to help them get their own villages going.

Dementia Villages in the United States

Unfortunately, the United States has yet to adopt the model, but that doesn’t mean it won’t happen. As more dementia villages start to open and provide dementia patients with improved life experience, you can bet that entrepreneurs in this country will take up the call to explore the option here as well.

For now, nursing homes and assisted living facilities with memory care are the norm. In the years to come, more dementia patients may well gain a new option that provides the same level of care in an environment that feels more like normal life.