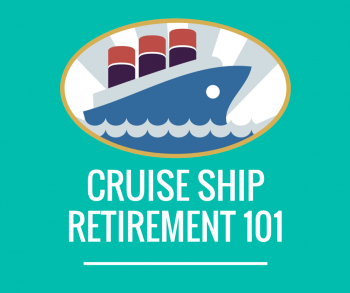 Traveling when you retire is a common trope. Everyone wants to fit all those trips they couldn’t afford or make time for in their younger years into their retirement life. Some seniors take this a step further by shifting to an all-travel all-the-time lifestyle by buying a mobile home or, in a less traditional move that’s getting some online attention, retiring on a cruise ship.

Cruise ship retirement is far from a common trend amongst seniors, but a few retirees have taken the plunge and gained attention for choosing a retirement lifestyle that sounds like a fantasy. There’s not one way for cruise ship retirement to work, but the common gist is that a senior chooses to sell most of their earthbound property and belongings and turn the money they’ve made toward the cost of spending their remaining days on a cruise ship.

In most of the cases that have been covered in the press, the senior chose a particular cruise ship to stick with and rented out a cabin for the long term. A senior could potentially aim to switch things up and plan to move from cruise ship to cruise ship for some extra variety, but that plan would require a good amount of planning, scheduling, and result in higher costs.

Either way, if you love the sea, are reasonably healthy, and can afford the costs, cruise ship retirement could be an option for your retirement years.

The whole idea of retiring to a cruise ship mostly came onto the scene through the stories of a couple of individuals who have done it. As some of the first people to explore the option of cruise ship retirement, neither had any clear models to follow. They simply saw a path that would allow them to consistently do what they love and took it.

Lee Wachtstetter has been sailing on the Crystal Serenity for about seven years. She’d loved cruises for years, going on 89 of them with her husband during their 50 years together. When her husband passed, she sold their home and used the proceeds to take up permanent residence on a luxury liner.

While all those earlier trips with her husband were exciting opportunities to see new places, now that she’s been living on the cruise ship for a while she rarely even bothers to get off when the ship ports in order to see places she’s already seen several times by now. At this point, the appeal is more in the amenities and activities on board, especially the dancing. She keeps in touch with her family via Skype and has developed friendships with many of the crewmembers. She estimates her annual cost is about $164,000 per year total – including things like meals, gratuity, and activities, as well as the cost of the cabin.

Beatrice Muller spent years at sea living on the Queen Elizabeth 2 cruise ship. Like Lee, she came to love cruise ships after trips with her husband and went on regular cruises with him until he passed on one of their trips in 1999. Soon after she decided to go on board as a full-time resident and stayed there until the ship was retired in 2008. She was the ship’s only full-time resident for the years she spent living there.  Her accommodations cost her about 3,500 pounds (it was a British liner) a month, a reduced cost based on her frequent floater points.

While Lee and Beatrice were outliers – they attracted press coverage specifically because what they were doing was so far out of the norm – a couple of companies have responded to the interest many people clearly have in living full time on a cruise ship.

The World offers “residences at sea” in the largest private residential ship on the planet.  The ship includes 165 residences that include studios, one bedrooms, two bedrooms, and three bedrooms. The residents that own one of the spaces on the ship all also have part ownership in the ship itself, so by buying a room you’re also buying the ability to weigh in on where the ship goes and when.

The World is a luxury ship with spaces ranging in cost from $1 million to $13 million, so ownership is only an option for those who are especially wealthy. But the ship travels all around the world offering endless variety and the amenities are as luxurious as the price suggests.

The World has the distinction of being up-and-running, while many ships devoted to ongoing cruise ship living are still in the planning stages. The Australian company Cruise Ship Retirement (www.cruiseshipretirement.com) promises affordable adventures and destinations soon-to-come and The Marquette (www.rivercitiescondos.com) sells condos on a ship that will continually travel the major rivers of the continental US. Alive at Sea (www.aliveatsea.com) specifically aims to offer independent and assisted living options for seniors on their ship once they set sail.

While not on the waters yet, these businesses make it clear that entrepreneurs and investors are starting to realize that many seniors have an interest in living at sea in their retirement years. If they’re successful, you can expect more opportunities to become available in the years to come.

How Much Does it Cost to Live on a Cruise Ship?

The ships gearing up to specifically offer retirement living on board could turn out to be more affordable than the current options, but to live on board a cruise ship the way Lee and Beatrice did, you’d have to have some pretty solid savings to start with.

Both women sold their homes to help fund their time on the liners and lived on the same cruise liner consistently, meaning they could take advantage of frequent traveler awards. One of the reasons their stories got so much attention is that people doing the math could eagerly proclaim their costs to be “cheaper than a nursing home!” That’s an enticing claim, but one that ignores the fact that seniors don’t default to living in a nursing home after retirement, they only move into one when they can no longer care for themselves without regular medical professionals on hand to help – an amenity that cruise ships don’t currently offer.

That said, the costs aren’t too far off from what some higher-end independent living communities charge, so seniors that haven’t yet reached the point where they need the level of care provided in assisted living or nursing homes may find that comparison more apt.

What to Consider if Cruise Ship Retirement Sounds Good to You

A lot of practical concerns can get lost in the fantasy of wanting to live out your final days on a cruise ship. Before you sell all your belongings and go all in, take some time to consider the tradeoffs.

Maybe nothing on that list struck you as a deterrent and you’re like the few who have come before who can imagine no better fate than spending your golden years on a cruise ship. If anything gave you pause, it might be time to re-think the dream.  In any case, with more cruise ship retirement options likely to come on the scene in the future, you can always reconsider the option later.

If you’re looking for the best value options for senior care, be sure to visit SeniorAdvisor.com to see reviews, ratings, and prices for assisted living and more.

Where Do People Live the Longest?
Living with Chronic Pain: Coping Mechanisms for Seniors