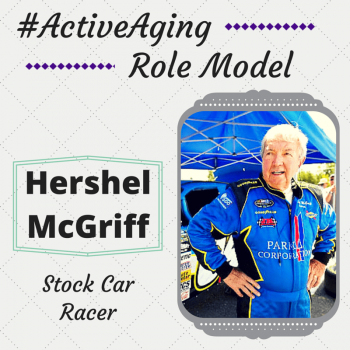 You may have heard a joke or two about “senior drivers” – slow, confused, maybe a little out of control. But legendary American stock car driver Hershel McGriff has debunked that misconception one lap at a time.

In fact, McGriff’s latest start on the track was in 2012 at the age of 84, proving that you’re never to old to keep pursuing your favorite hobbies, especially if you are particularly good at them. And there’s no questioning that McGriff is one of America’s most talented racers, enjoying a career that spanned more than four decades and included countless awards, such as:

Born December 14, 1927 in Bridal Veil, Oregon, Hershel McGriff launched his stock car racing career in September of 1945 at the dirt-paved Portland Speedway. He had recently returned from fighting in WWII and he finished 13th in his family’s sedan. Five years later, he participated in the cross-country Pan America Road Race in Mexico, driving a 1950 Oldsmobile 88 for more than 27 hours at an average 79 mph. The same year McGriff made his NASCAR debut where he finished 9th.

In 1955, he was offered a spot on millionaire Carl Kiekhaefer’s newly formed NASCAR team, but instead decided to return home to the West Coast to tend to his growing timber and mill business. It wasn’t until 10 years later that he returned to racing, starting in the 41st spot at Riverside in 1967, and moving up to second place by the sixth lap. That day we would beat Ron Grable in a photo finish.

McGrif experienced first-hand the evolution of American stock car racing. From the rough-and-tumble 1950s to the finely tuned 90’s, McGriff accumulated 35 victories, and is Winston West’s winningest active competitor. He has competed in a stock car in France, Australia, and Japan and tops the list of pole awards in Winston West Series poles with 35.

Although he officially retired from racing at 74, McGriff seemed to know racing would always be in his blood. After one of his two Hall of Fame inductions, he would promise a return to a short track after turning 80, just to “show the young guys that I can still do it.” At the age of 84, he did just that, starting in the West Series on June 23, 2012, at Sonoma Raceway.

Experience the world through Hershel’s eyes… take a lap around the Portland International Raceway with him in this video:

Can You Get Paid for Caring for your Elderly Parents?
Gifts for Caregivers