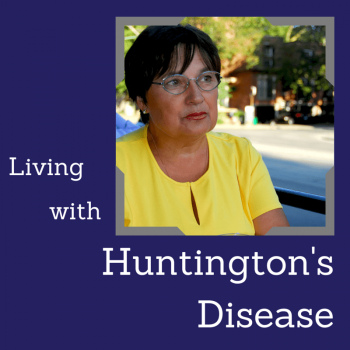 Random jerky, uncoordinated motions characterize Nadine’s movement. She is in the beginning stages of Huntington’s Disease. This inherited disease usually manifests between thirty-five and forty-four years of age, but Nadine is fortunate. It has just begun for her in her sixties. As succeeding generations fall prey to the disease, the onset appears when they are younger in each generation. Not everyone who has an ancestor with Huntington’s Disease will get it, though. The small uncontrollable movements which signal the onset of the disease are called “chorea,” a medical term.

As Nadine gets older, the disease will get worse. Her body and limbs will become rigid at times and her movements will become uncontrollable. This often results in strange facial expressions and difficulty with chewing, speaking and swallowing. Eating is so much trouble that sufferers often lose weight. Nadine will also suffer from insomnia.

Because this is a disease that affects the brain, Nadine’s ability for abstract thinking will eventually be dulled. She won’t be able to distinguish between acceptable and unacceptable behavior. She won’t be able to plan or to learn. Eventually her memory will be affected. She won’t remember parts of her life, nor will she remember how to move her body for activities that she has performed thousands of times. She will eventually suffer from dementia and she can anticipate depression, anxiety and blunted emotions on the horizon. After that, she may succumb to aggressive or compulsive behavior or become very self-centered. These are the symptoms that will most distress her family. Any quirks Nadine had before the illness will be magnified. If she liked to gamble, she may become a compulsive gambler and lose all that is in her bank account. If she likes to drink, she may become an alcoholic. If she enjoyed sex, she may have way too much of it. The road ahead does not look good for Nadine, but she really won’t be aware of any of it. The road ahead looks dismal for her spouse and family.

Everyone is born with two copies of the Huntingtin (HTT) gene. But if one of these begins to mutate and replicates itself when the string gets long enough the disease will begin to manifest. It can be inherited from either parent and the length of the mutant gene that is inherited influences the age of onset and severity of the disease. Only one of Nadine’s parents had the mutant gene, so Nadine had a 50% chance of getting Huntington’s Disease. If both her parents had had the mutant gene, a rare occurrence, then Nadine’s chances would have been 75%.

What can Nadine and her family do in their situation? Learning about the disease is a beginning to understanding the changes Nadine is going through and knowing what to expect. First movement and then inhibitions are affected. Nadine’s family may choose to increase watch over her if she shows signs of erratic behavior. This can be done by hiring a caregiver to help out or by recruiting family members and friends. When her decline progresses further the family may choose to hire more caregivers, or may opt to put Nadine in a retirement home.

Repeated, unintentional movement is often the reason medical treatment is first sought. This is not the occasional jerking of our bodies just before we drift off to sleep. That is entirely normal. The movement requiring a doctor’s appointment is repeated during the day and may change from one limb to another.

The stiffness in walking due to the disease may cause Nadine to fall, so she may need a walker. As the disease progresses, doctors can recommend various treatments to alleviate the symptoms, although there is no cure at this time. Physical therapy, occupational therapy and speech therapy may help. There are drugs that can lessen the involuntary jerking movements.

Other drugs will help with depression and inappropriate behavior. Nutrition management is important because of difficulty swallowing. Thickened liquids are easier to swallow and less likely to cause choking. This multidisciplinary approach to treatment needs to be carefully coordinated. But most important is for Nadine’s family to tell her that they love her, to give her hugs, and to remember that it is the disease that is making her behavior erratic, not Nadine herself. Lots of love and patience is needed to deal with Huntington’s Disease.