SeniorAdvisor.com Blog > Blog for Families > Retirement Planning > How to Talk to a Senior Parent About Their Financial Health

How to Talk to a Senior Parent About Their Financial Health

A lot of people find it hard to talk about money. Conversations about how someone’s doing financially are hard enough in the best of times, but talking about financial health with an aging parent can be especially tricky. For many years, they were the one teaching you about finances. Now you recognize that they’re approaching an age where they’ll probably need help managing their money. 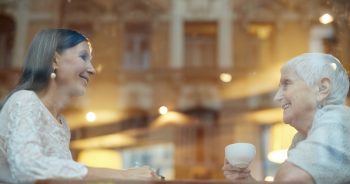 It’s uncomfortable to bring up, but addressing money concerns with your aging parents is an important talk for families to have. If you’re struggling with figuring out how to approach the issue with your loved one, here are a few tips to make it easier.

Bringing Up Financial Health with a Senior Loved One

The short answer here is: before you have to.

Beyond that, there’s not really a right time – it’s just a matter of getting it done.

Andy Smith CFP® and Co-Host of the Financial Engines Investing Sense show says it’s best to see it as a series of talks rather than one big, serious conversation. “People need to think of it as a process. You can have little bits of a conversation all along the way.”

Finances aren’t the kind of thing you deal with once and you’re done with, and you’ll likely want to tackle different issues with your loved one at different times.

According to Smith, “the first conversation’s always going to be the toughest because you think that you’re going to be upsetting people and putting them on edge and that’s not the case. You’re talking to family and family’s going to know you have their best interests at heart.”

If you’ve been putting off “the talk” because you’re imagining a dramatic discussion and are worried about upsetting your parent, then reframe how you’re thinking about it. It doesn’t have to be that way and it probably won’t be that bad. Make a point to bring it up sooner rather than later and get that first discussion out of the way so you can clear the path for the steps you’ll need to take down the line.

You don’t have to start with the big stuff. Begin by asking some simple questions about their investments or spending habits. If they have a financial advisor, ask if you can join them the next time they have an appointment. Gaining an understanding of their financial situation now will make it a lot easier to take a more active role down the line if they start to have a greater need.

Smith suggests that one of the best things you can do to keep conversations about your loved one’s finances amicable is to position yourself as a “financial speed bump” – you’re not telling your parents what they can and can’t do with their own money, you’re offering to help slow things down before they make a big financial decision to consider if it’s the best move.

Eventually – hopefully after a number of smaller conversations about finances – you’ll need to get into some of the bigger questions like how you’ll handle the finances as a family if your loved one loses the ability to do so themselves. Make sure to have that conversation at a time when everyone involved can join. That way you can make sure everyone’s on the same page and no one feels left out. But try to find a time to do it that’s not in the middle of a holiday so it’s not distracting from quality time you’d rather be spending on something else.

There are some important things you should cover in your conversations with your senior parent about their financial health:

If they’re not yet working with a financial advisor, that’s a step worth taking together. Make sure you find a fiduciary to work with, they’re required by law to make decisions that are in your best interest – not all investment advisors are. Smith recommends working together to create a plan that is goal based and that you’ll regularly revisit and update throughout the year. That way you’ll always have something to go back to in your future conversations to keep things clear.

At some point, you’ll also want to talk about providing power of attorney to a family member. If the day comes when your parent can no longer make financial decisions on their own, you want to be prepared with a clear plan for who should take over and make sure they have the legal means to do so.

Smith’s final word of advice is “don’t feel like you have to do anything alone.”

If this all feels daunting and hard to face, it will be easier if you let someone else in. If you have siblings to work through the process with, then have these discussions and make plans together. If not, turn to your spouse to ask for help.

Even if everyone involved in these discussions handles things well and they never get contentious or difficult – it’s a reminder to all involved of potential difficulties to come as your parent ages. That’s hard to face and you’ll all bear it better with the support of loved ones.

Talking to your senior parent sooner rather than later about finances and the future could save you a lot of confusion and difficulty down the line.

Go ahead and pick a time to address it with them now. You’ll both be better off for it.