SeniorAdvisor.com Blog > Blog for Families > Senior Health & Fitness > These 3 Dancers Will Inspire You to Get Moving

These 3 Dancers Will Inspire You to Get Moving 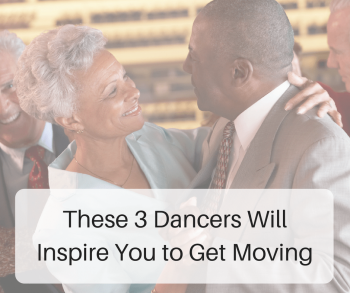 Dancing is fun, it’s good for your physical and mental health, and for at least some people it seems to be a fountain of youth. A leading Australian choreographer, an ‘80s popstar and dancer, and entertainer Dick Van Dyke still have more than just a spring in their step. They have evidence for the rest of us that creative movement, constant learning, and a youthful attitude can help us keep going gracefully.

Elizabeth Cameron Dalman founded her native Australia’s national modern dance company in 1960, after a childhood of ballet classes and several years studying modern dance, performing, and touring in Europe and the US. This fall, the 82-year old is dancing in a modern version of the classic ballet Swan Lake, as retooled by Irish choreographer Michael Keegan-Dolan, with performances in Dublin, London, and Copenhagen. Dalman told ABC Australia the new show reminded her dancing Swan Lake in her 20s. Ireland’s Independent called the new Swan Lake “utterly original, utterly brilliant.” Dalman’s work is living proof that there’s always something new to discover in familiar classics.

Toni Basil made a splash in the 1980s with her single “Hey Mickey,” but her lifelong love is dance. She’s choreographed videos and tours for pop and rock stars, performed with a street dance group, and judged dance competitions around the world. She’s also still learning, a surefire way to keep mind and body young. Over the summer, the 72-year old dancer took a workshop from French dancer Babson Baba Sy, and his video of her improvising in class has been watched more than 2 million times. To stay healthy at any age, Basil recommends finding classes in the type of dance that goes with your favorite music, because “it will become infectious and you’ll keep going back.”

A film and tv star whose motto is “keep moving”

It’s been more than half a century since actor and dancer Dick Van Dyke co-starred with Julie Andrews in Disney’s adaptation of “Mary Poppins,” but time hasn’t taken the shine off his moves. The 90-year old entertainer wowed viewers earlier this year with his spry steps during the finale of a Mary Poppins dance number during a Disney special on ABC.  Van Dyke’s latest book, Keep Moving and Other Tips and Truths About Aging, has just been released in paperback. He follows his own advice, whether he’s teaching NBC’s Al Roker a few dance moves or flying to Las Vegas to celebrate his wife Arlene Silver’s 45th birthday with Céline Dion.

If you’re interested in learning to dance, check out your area’s dance studios, senior centers, and city recreation centers to see what’s available. Local assisted living and independent living communities may offer classes, too. If possible, start with beginner-only classes rather than mixed-level ones so you can focus on what you want to learn rather than comparing yourself to more advanced students. Look for dance styles and schools that offer social events, too, where you can get to know your fellow students and see what they’re learning. Learn more about popular dance styles for seniors on the SeniorAdvisor.com blog.