Need Some Fitness Motivation? Check out these 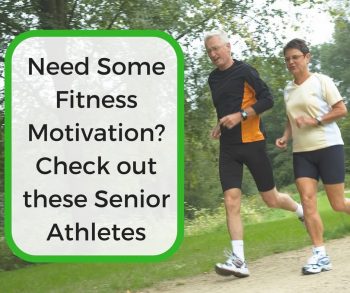 Staying active is good for you at every age, and while most of us take on less strenuous fitness regimens as we age, there are some seniors out there doing strenuous sports at 80, 90, even 100. Here are a few elder athletes to inspire you to take a yoga class, lace up your running shoes, or even sign up for water aerobics (pending a discussion with your doctor beforehand, of course).

Seniors who scale and ski mountains

Yuichiro Miura of Japan plans to climb Mt. Everest when he turns 90 in a few years. This is big news in the mountaineering world because Miura summited Everest at age 70 and again at age 80. Even those feats put him on familiar territory. He famously skied down Everest with a parachute on his back at age 37. Because of that ski run and his others down famous mountains around the world, Smithsonian Magazine dubbed him “the Godfather of Extreme Skiing.” His perspective on aging is to “regard the age of 80 as a start” for pursuing your goals.

Miura isn’t even close to being the world’s oldest skier. His own father was still skiing at age 99, and this year the woman recognized at the UK’s oldest skier retired at age 102. Hilda Jamieson of Scotland learned to ski in the 30s. As an adult, she and her husband developed a ski center near their home that’s a popular destination today. She golfed until she was 100 and was an avid ocean swimmer as well. Jamieson passed away not long after announcing her retirement from skiing. Among her children, grandkids, and great-grandchildren are several national skiing champions and at least one Olympic athlete.

Harriette Thompson of North Carolina became the oldest person to complete a marathon in 2015, when she finished the Rock ‘n’ Roll San Diego race at age 92. Although complications from skin cancer treatment sidelined her this year, she hopes to run again next year. She has inspired runners of all ages, including other senior marathoners like 74-year old Gene Tharp of Indiana.

Bodhi Hanna Kistner of Germany was such a “terrible student” when she began Zen archery lessons at age 60 that her teacher booted her from his class. Kistner stuck with it, she told The Age of Happiness, because the meditative aspects of the sport appealed so strongly to her. Now the 86-year old teaches Zen archery to students around the world.

The world’s most senior yoga teacher

Ninety-eight year old Tao Porchon-Lynch has been the world’s oldest living yoga teacher since 2012. She’s a lifelong globetrotter who was born in India, where she started practicing yoga as a child in 1926. Porchon-Lynch has taught yoga for more than 45 years and currently teaches several classes each week in New York State. She’s also an accomplished ballroom dancer and a media darling, thanks to her appearance on America’s Got Talent and her positive attitude about aging.

Do you want more inspiration to kick-start your fitness routine? You’ll find plenty of exercise ideas in our blog’s Senior Health and Fitness section.