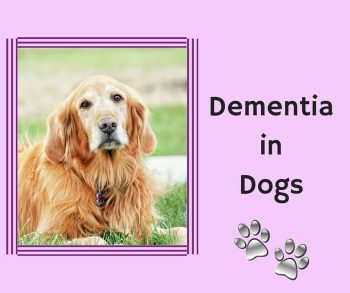 As the senior population grows, we all hear a lot about dementia. But mostly, we think and talk about how it affects the seniors in our human community. Dementia isn’t specific to people though. Many families also deal with the influence of dementia on another type of family member: our dogs.

Dogs that experience dementia in old age are fairly common. One vet, writing for the Washington Post, said he provided a dementia diagnosis for dogs he treated almost daily. As with humans, a dog with dementia is still your beloved pet, but their personality and behavior can change drastically due to the illness.

Does Your Dog Have Dementia?

The more technical term for dog dementia is canine cognitive dysfunction. On a brain scan, it looks remarkably similar to human Alzheimer’s. Many of the symptoms look pretty similar as well.

If your dog is getting old and exhibits one or more of the following, then it’s worth talking to your vet about whether or not they may have canine cognitive dysfunction:

Not all dogs with dementia will necessarily display all of these symptoms, but if you notice your dog starting to show some of them, it may well mean they’re in the early stages of the disease.

What Can You Do About It?

As with human Alzheimer’s, we don’t have any way to cure the disease. Your best bet is to find ways to adapt to your dog’s new behavior and try to treat some of the symptoms they show.

There are some prescription drugs believed to slow the effects of canine dementia. Talk to your vet to see if they feel your dog could be a good fit for one of these. If many of the symptoms your dog is exhibiting relate to increased anxiety, you may also be able to provide them with a medication designed to help relax them.

In addition, you can make some changes (or intentionally avoid changes) in your home environment that will make daily life easier on your dog. Pay attention to how your furniture is arranged to ensure there aren’t too many places in your house where your dog is likely to trip or fall. But in general, avoid moving the furniture around or making any changes to what your dog is used to, since that will cause confusion in them and potentially even fear.

Understand that your dog won’t be as comfortable meeting new people or visiting new places, and be patient with them when they do encounter unfamiliar scenarios. Do still try to play with them and practice some of their old commands. They may not be as obedient or interested in the attention as they used to be, but it can be good cognitive practice for them.

Finally, try to stick to a pretty consistent routine. When the world around them is starting to look strange and scary, having a familiar routine to stick to can help ease some of the anxiety their confusion can cause.

And of course, continue to provide them with the love and care you always have.

There may come a day when the effects of the dementia, combined with other conditions caused by their aging, mean that their quality of life decreases to the point where considering euthanasia could be the best thing you can do for them. Talk to your vet and trust your own feelings. You know your dog better than anyone and only you can decide when it’s time to ease their suffering.

Gifts for Parents’ Day
Divorce After 50