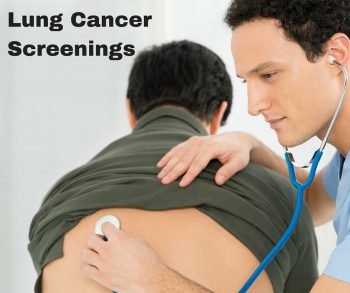 Lung cancer is the leading cause of cancer death for men and women in the US. That’s partly because patients usually don’t have symptoms early, when the disease is most treatable. Doctors recommend lung cancer screenings for people with certain risk factors to catch the disease early enough to treat it. Here’s a look at who should be screened and how early detection can help.

How much of a difference can early detection make?

Who should be screened for lung cancer?

The US Preventive Services Task Force, an independent group of medical and preventive health experts, published its latest lung cancer screening recommendations in 2013. They call for yearly screenings of adults between age 55 and 80 who:

Medicare and many private insurance plans cover the entire cost of lung cancer screening for patients who meet the USPSTF criteria above. If you’re unsure about your coverage, you can check this American Lung Association chart.

Your doctor may also advise screening due to other risk factors like a history of exposure to asbestos, radon, lots of secondhand smoke, industrial chemicals and mining pollutants. If a parent or sibling had lung cancer or if you’ve had radiation treatment for other types of cancer, your doctor may want to screen you.

What types of lung cancer screenings are available?

There are lots of ways to look for early-stage lung cancer, including chest x-rays and lung mucus testing. The American Lung Association says the most effective lung cancer screening tool is the low-dose spiral CT scan. The LDCT gathers multiple images of the patient and the combined images can show even small, slow-growing tumors. Medicare covers this type of scan for high-risk beneficiaries from age 55 to 77.

What happens after the screening test?

Your doctor will tell you the results of your scan after they’ve been read by a radiologist. If the scan is clear, you don’t have to do anything for another year (although if you still smoke you should work on quitting). If the scan shows something suspicious, your doctor will probably order more tests. Remember that not every growth that shows up on a scan is cancer. If further tests confirm cancer, your doctor will go over treatment options with you, and you’ll have more options and better potential outcomes because of early detection.