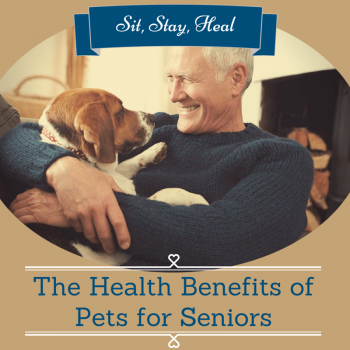 May is National Pet Month, and the spotlight is on the ways animal companions enrich our lives – including, some scientists say, better health. There’s not a huge body of research into the health benefits of pet ownership, but the existing research indicates that for many seniors, a live-in furry friend is the key to a more active, more connected, and less stressed lifestyle.

Getting a pet gets people moving

Several studies have looked at the effects of dog ownership and found, perhaps unsurprisingly, that daily dog walks help older folks maintain a higher level of physical activity than people of the same age without dogs. In particular, one National Institutes of Health-funded study found that over the course of 3 years, adults age 71-82 who walked their dogs regularly were able to walk faster, walk longer, and get around more easily at home than people the same age without dogs.

The higher level of activity may account for the increases in heart-attack survival found by other NIH-backed researchers. Among more than 400 heart-attack survivors, scientists found that those who owned dogs were more likely than non-pet owners to make it to the one-year post-attack milestone, even if their heart attacks had been severe. Other physical benefits researchers have found among older pet owners are lower blood pressure and better cholesterol levels.

The power of positive pet ownership

The upsides of keeping a pet aren’t purely physical. Researchers found that dementia patients with pets in the home have fewer anxious outbursts. Other studies saw lower rates of depression and anxiety overall among older pet owners compared to the general senior population. In fact, pets seems to have a protective effect on mental wellbeing at every age. A paper published in the Journal of Personality and Social Psychology detailed the perks of pets for “everyday people.” Researchers concluded that “pet owners had greater self-esteem, were more physically fit, tended to be less lonely, were more conscientious, were more extraverted, tended to be less fearful and tended to be less preoccupied than non-owners.”

According to Web MD, senior caregivers report less stress when there’s a pet in the home, and that could mean less burnout and lower turnover. Pets can also help people who might otherwise feel isolated to meet neighbors and start conversations. Some experts say pets make great “wingmen” for daters who prefer the dog park to the bar scene.

Should a pet be part of your health regimen?

Life with pets isn’t stress-free. Some things to consider before adopting a pet include the cost of veterinary care, daily responsibilities, the potential for trips and falls, and grief when a pet dies. If you can cope with those issues, an animal companion can be a playful version of an apple a day.

Many shelters offer “seniors for seniors” programs, which pair calm older pets with mature adults. Such programs usually offer a reduced adoption fee and post-adoption support if your living situation changes. Spay/neuter surgery and vaccinations are usually included in the adoption fee, which can save you a hundred dollars or more.

Hang out with a few cats, dogs, or other animals you’re interested in to get a sense of their personalities and how the two of you would get along at home. Applying to foster a particular animal before adopting can give you a preview of life together. Take the time to make a careful decision now and you’ll enjoy a rewarding and healthy relationship with your new furry friend.

Head over to our Facebook page for more pet-related fun, including our Which SeniorAdvisor.com Dog Are You? quiz AND our photo contest, where you can submit a photo of your favorite furry friend for a chance to win a $100 Petsmart Gift Card!

What is a Geriatrician?
Robotic Pets