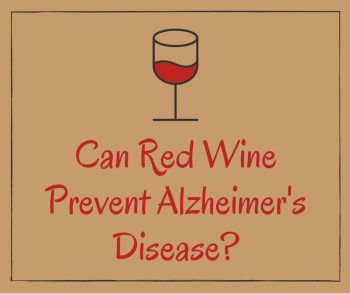 Alzheimer’s is a disease that largely takes over the lives of its victims. Those who have seen a loved one succumb to Alzheimer’s know the toll it can take on the lives of patients and their loved ones.

Researchers know little at this point about what causes Alzheimer’s and what people can do to prevent it, which is why when any news comes out that may be useful – people pounce. And people especially like it when that research seems to suggest doing something they like anyway.

Red wine includes an antioxidant called resveratrol that’s been found to strengthen the brain and possibly slow the effects of Alzheimer’s and vascular dementia.

While there’s not one clear cause of Alzheimer’s, one of the factors that contributes to it is protein buildup in the brain. In a 2005 study, seniors that had been diagnosed with Alzheimer’s were given a concentrated dose of resveratrol – equivalent to the amount you’d get in 1,000 bottles of red wine – every day.

After a year, those given the resveratrol showed no change in the amount of protein buildup in their brain associated with the progression of Alzheimer’s – meaning the disease hadn’t shown any real progression. Those that weren’t given the dose progressed at the normal rate for Alzheimer’s patients.

What Does The Research Really Mean?

To start, it doesn’t mean that you should be drinking 1,000 bottles of red wine a day. Focusing on the link to red wine makes for good headlines, but it’s not really what the study was about. Resveratrol and red wine aren’t the same thing, the latter merely contains some of the former.

And resveratrol’s not specific to red wine. You’ll also find it in a number of other foods including grapes (predictably), blueberries, peanut butter, and dark chocolate, to name a few. But it’s especially abundant in red wine and some experts believe people absorb more of it when they drink it since the alcohol makes it more soluble.

None of the food or drink sources for resveratrol will provide you with the quantities the patients in the study consumed though. The only way to get that much resveratrol in your diet is take a supplement like the one they were given.

That said, in moderation, it certainly doesn’t hurt to let foods and drinks with resveratrol into your diet. Just don’t go overboard – any health effects you get from red wine (or chocolate or peanut butter or anything, really) are quickly offset by the health risks if you consume it to excess.

What Else Can I Do?

If there was a secret to avoiding Alzheimer’s completely, we’d all be doing it by now. As it is, the best we can do is try to be healthy in ways that reduce the risk or slow down the onset.

If you’re concerned about the possibility of Alzheimer’s, a few things you can try are:

There are no guarantees that any of these will ward off the disease, but they can keep your risks lower for longer and help improve your quality of life in the meantime.

Researchers are putting in the work every day to try to get us closer to finding a cure or at least a better solution for managing Alzheimer’s. Some day soon, we may have a better answer. For now, the best we can do is try to live as healthily as possible and help those we love who already have the disease have the best quality of life we can give them.