What is Transient Global Amnesia? 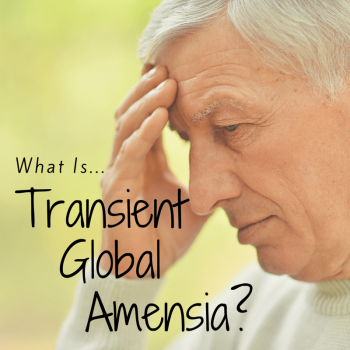 It sounds like the plot of science-fiction movie: One moment you’re fine and the next, you don’t know where you are, what’s happened during the last few hours or days, or what’s going on from one minute to the next. There’s no pain, no obvious head injury, and the ER doctors say your brain scans show no sign of a stroke, tumor, or other physical problem. Instead, they say, you most likely have transient global amnesia—a condition you may not have ever heard of—and that it will probably clear up in a day or so.

Unfortunately for people who find themselves dealing with sudden memory loss, transient global amnesia (TGA) is not a plot device made up by a screenwriter playing on our worries about memory loss and “senior moments.” It’s a real condition that’s considered medically harmless and relatively rare, but it disproportionately affects older adults. TGA is almost unheard of in people younger than 40, and it’s 4.5 more times more likely to occur in people over 50 than in younger adults.

People with transient global amnesia become suddenly confused about their surroundings and they may not recognize people they know, without any clear cause such as a head injury or stroke. They’re also unable to recall events of the past few hours—up to a day’s worth of memories may seem to just vanish. Despite the short-term memory loss, TGA sufferers know who they are, understand language, and recognize common objects. The lost memories and awareness return gradually over the course of a day or so with no treatment.

TGA episodes have happened to people after having sex, jumping into an icy lake or taking a dip in a hot tub. Strenuous exercise and severe emotional shock can also trigger TGA. The Mayo Clinic says that migraine headache sufferers are much more likely than other people to experience TGA. Most of the time, though, there’s no clear reason why transient global amnesia happens. Most people never have a second episode, and doctors say there’s no reason to worry that TGA will lead to a stroke or other life-threatening health issue.

What to do in case of sudden memory loss

First, don’t assume it’s TGA. Treat any sudden memory loss or sudden confusion about the present as a medical emergency. Remember, TGA is rare compared to other causes of memory loss such as stroke, seizure, and other brain problems that need immediate attention.

Your parent or loved one should not go alone to the ER because it may add to their confusion and because they probably won’t be able to provide clear information to the staff. Go with them or meet them to give the nurses and doctors their health history and baseline health status. Take notes on what the doctors say and what tests they order, and reassure your parent that you’re there to help them get things sorted out.

Take notes on the doctor’s recommendations, too. He or she may suggest that your parent avoid or limit whatever activity happened right before the memory loss. And notify the doctor if your parent’s memory doesn’t return within 24 hours.

Dangers of Dehydration in Seniors
What is Assisted Living?