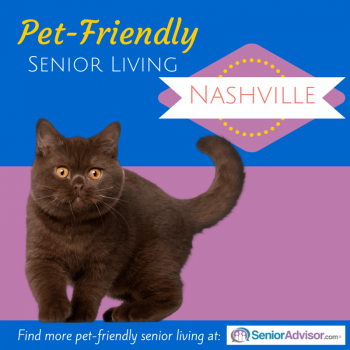 Nashville is known around the world for its music scene and history; what’s less widely known is that Music City is also considered one of the best places to retire and one of the country’s friendliest cities for pets. From riverside trails and popular dog parks to feline boutiques and dozens of dog-friendly restaurants, Nashville extends Southern hospitality to pets and people.

The cat’s meow in Nashville

When you consider that Nashville is home to the world’s most famous cat lady (pop singer Taylor Swift, whose felines have their own social media following), it’s no surprise that the town also has an active community of cat lovers. Music City Cat Club holds a spring show each year, while the Nashville Cat Club’s show in October is part of the city’s Oktoberfest celebrations. Both shows welcome household pet entries and offer a great way to meet fellow cat aficionados.

You can also find feline fanatics at The Cat Shoppe and Dog Store in Nashville’s Berry Hill neighborhood. This boutique sells food, treats, pet gear, and toys. It also has a small, ever-changing troop of free-roaming indoor cats and kittens from local shelters that are available for adoption and in-store snuggles.

Every day’s a dog day in Music City

Nashville welcomes on-leash dogs in all city parks, and the city is even experimenting with early-morning off-leash times in some parks that aren’t already off-leash areas. There are 5 parks specifically for canine free-roaming:

– Centennial Dog Park sits atop a hill in Centennial Park, giving dogs a total of 3 acres of play space. Park use requires a membership and a $50 annual fee for one dog, $75 for 2 dogs.

– Shelby Dog Park is another big park that’s popular with the locals, who especially recommend it for large dogs (and small dogs who prefer to run with the big dogs).

– Warner Dog Park is where area dog owners take dogs who need to run off lots of energy. Best described as a flat, open field, Warner is short on shade but long on space to wear out energetic dogs.

– Pitts Park is another dog park with a fenced trail—one that leads visitors on a short hike through the woods.

In addition to its pup-friendly parks, Nashville has more than 190 miles of greenway trails around town, many of which are paved for easy walking with friends and pets.

Pet-friendly places to live in Nashville

There are more than 2 dozen independent living and assisted living communities in the greater Nashville area that are open to pets. These include several winners of the 2015 SeniorAdvisor.com Best of Senior Living awards, as chosen by resident and family member reviews. Among the award-winning independent living options are Windlands East and Windlands South, Maybelle Carter Senior Adult Care, Provision Living in Hermitage, Brookdale in Hendersonville, and Rutland Place in Mt. Juliet. Assisted living winners that welcome pets include Brighton Gardens and Wellington Place in Brentwood, Elmcroft of Hendersonville, and Mary, Queen of Angels in Nashville.

With great weather, lots of green space, a thriving music scene, and a pet-friendly attitude, it’s safe to say that Nashville really puts on the dog for seniors and their pets.

How Much Does Nashville Assisted Living Cost?

How Much Do Nashville Nursing Homes Cost?

Find assisted living in Nashville near you.