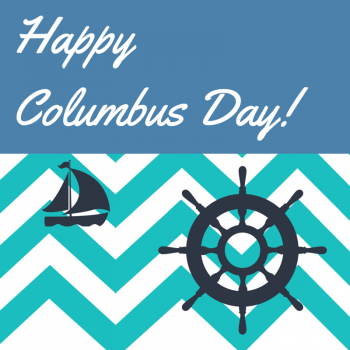 “In 1492, Columbus sailed the ocean blue.” We all learned the rhyme and it may be the only date in history that we can readily recall. October 12 was officially declared Columbus Day in the US, after the Knights of Columbus lobbied President Franklin D. Roosevelt in 1937. They wanted a role model for young Italian boys to look up to. The date had been declared a legal holiday in 1892, but was called Discovery Day.

October 12 is the anniversary of Columbus’ landing on San Salvador Island in what is now the Bahamas. It is celebrated in many countries in the Western Hemisphere, sometimes called Discovery Day, or Day of the Race (El Día de la Raza) or Día de las Américas (Day of the Americas) in Spanish-speaking nations. It is also celebrated in Spain and Italy. The day was celebrated unofficially in the US as early as 1792 in various cities.

The Italian-born Columbus may not have been the first explorer to set foot on America, but he did open the way for European settlement on these two previously unknown continents. He set sail from Spain, financed by Isabel and Ferdinand, the queen and king of Castille and Leon. The monarchs had just completed the Reconquista, or reconquering, of Spain after 700 years of Moorish (Muslim) occupation. Their idea was to gain converts and to replenish their depleted treasury after the prolonged war. Columbus and others who followed him did such a good job of sending gold, silver and pearls to Spain that the Spanish economy suffered rampant inflation followed by a depression.

Columbus had intended to pioneer a sea route to Asia and its wealth of spices, gold and silk. It may not have been until his third trip that he admitted to himself that he had not landed in Asia, but on a new continent. Europeans were of the opinion that only one ocean separated Europe from Asia, hence Columbus’ desire to be given the title of Admiral of the Ocean Sea. They were unaware that the Atlantic and Pacific were separated by North and South America.

In recent years some controversy about Columbus Day has arisen. The city of Seattle, Washington, now celebrates Day of the Native American instead of Columbus Day because a lot of cruelty to the American Indians came about as a result of Columbus’ discovery. Columbus and his crew enslaved the natives; they demanded that they bring gold and if they did not, they cut off their hands. The Spanish Inquisition also followed Columbus to the New World. Even Europeans who were not overtly cruel to the natives brought infectious diseases to which the natives had no resistance like influenza, venereal disease and small pox. These diseases swept through native populations and wiped out entire tribes. Another controversy dates to the 19th century when many Americans were anti-immigration. They saw the holiday as promoting Roman Catholicism.

As of 1970 in the US, Columbus Day has been celebrated on the second Monday in October which is also Thanksgiving Day in Canada. No matter how you feel about it, in the US we enjoy a three-day weekend and often see a parade in the larger cities like San Francisco and New York. And there’s always football!