SeniorAdvisor.com Blog > Blog for Families > A Brief History of the US Navy in Honor of its Birthday 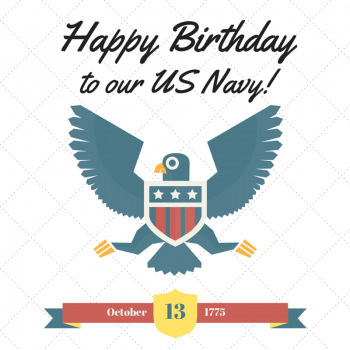 Started on October 13, 1775, the birth of the United States Navy actually slightly predates the beginning of the United States. As such, for its first few years in existence, the fleet was called the Continental Army and was devoted to disrupting shipments that came to the country from the United Kingdom. The initial fleet was mostly made up of commercial sailors in their own ships who honestly didn’t manage to make too much of a difference in the American Revolution. In traditional American fashion though, from small beginnings rose an important U.S. institution.

The U.S. Navy has now been involved in over ten major wars, defended the country against pirates, and played an important role in relief efforts worldwide.

One of the earliest uses for the U.S. Navy was to fight against the Barbary pirates that were taking over the country’s merchant ships, helping themselves to the items on board, and taking the men on the ship hostage. Thomas Jefferson sent the naval fleet of the day to the Barbary Coast in response. Two wars ensued before the pirates backed off. In recent years though, the navy has seen history repeat itself as Somali pirates attack U.S. ships. As they did in the past (although with better technology this time around), the navy has risen to the challenge.

The Navy in the Civil War

Abraham Lincoln used the U.S. Navy to set up a blockade off the Southern coast, effectively cutting off their trade with the outside world and limiting military supplies. The Confederacy responded by rounding up any ships they could find and the sea became one of the war’s battlegrounds. The fall of Fort Fisher in Alabama at the hands of a Union fleet played a key role in cutting off crucial supplies to the Confederate army and ending the war.

The Navy in WWI

Naval warfare played a significant role in WWI. When the United States made its late entry onto the scene, Navy ships were used to transport many of the troops across the sea and Navy destroyers were brought into play to help sink enemy submarines. Because the U.S. came into the war so late and because the Navy was small at the time we got involved, the U.S. Navy’s role in WWI was comparably small. That would change by the time WWII rolled around.

The Navy in WWII

In the years between the two great wars, the U.S. Navy grew considerably. By the time Pearl Harbor brought the U.S. into the conflict, the Navy had 350 major combatant ships. By the end of the war, the fleet had grown to 1,200. The Navy was an important part of the war in the Pacific Theater with their island-hopping campaign and several big battles with the Japanese Navy.

Starting in 1931, when the Navy sent a ship to Nicaragua with supplies and personnel to help the survivors of a serious earthquake, the Navy has been involved in a number of humanitarian efforts. They swung into action to help after Hurricane Katrina, the Haiti earthquake, and in the aftermaths of the tsunamis that shook Indonesia and Japan in recent years.

Today the U.S. Navy has over 300,000 active duty members and over 100,000 more reservists. They operate more in the air than on the sea, with over 3,700 aircraft in operation in comparison to the less than 300 battle ships they have. Many members of the Navy have been deployed in the engagements in Iraq and Afghanistan and many have been involved in worldwide humanitarian relief efforts the Navy helps with. From the early days as a small fleet of merchants to today, the Navy has undergone a significant transformation and has much to celebrate on its 240th birthday.

Happy 240th Birthday to our US Navy!