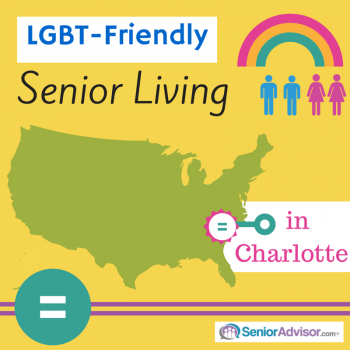 “Charlotte’s got a lot,” as the local slogan goes—a lot of history, shopping, and scenery that make the Queen City an appealing destination for LGBT senior living. Three of the city’s most eclectic, artistic, and destination-packed neighborhoods are also among the most LGBT-friendly, according to the local LGBT community center’s resource guide.

NoDa, the area surrounding North Davidson and 36th Street, is filled with historic architecture, funky art galleries, craft breweries, and several performing arts spaces. The residential area around NoDa is also popular with the locals because of the neighborhood’s walkability.

To the west, Uptown Charlotte encompasses the city’s first through fourth wards, where visitors will find the financial center’s bank buildings and the Federal Reserve. Uptown is also home to more than a hundred restaurants, nightclubs, and cafes. A number of museums and theaters are in Uptown, along with the Levine Center for the Arts.

East of Uptown and south of NoDa, the Plaza Midwood sits near the Charlotte Country Club. The gentrified former “streetcar suburb” has many restored historic homes that are maintained to local historic district guidelines to preserve the original character of the neighborhood.

There are several retirement communities and assisted living facilities to the south and east of NoDa, Uptown, and Plaza Midwood. For example, Brookdale Costwold is located near shopping, the Mint Museum, and local hospitals. The upscale Aldersgate retirement community features apartments, cottages, and executive homes and provides residents with a full continuum of care.

“LGBTQ Perspectives on Equality” is a group of exhibits at Charlotte’s Levine Museum of the New South through January 25. The program includes the Stonewall National Museum & Archives’ “Out of the Shadows” touring exhibit that covers LGBTQ American history from the end of WWII to the Stonewall Riots in 1969.

Charlotte Pride is the Carolinas’ biggest annual Pride event and one of the biggest along the Eastern seaboard, with more than 100,000 attendees in 2014. The 2015 Pride festival is scheduled for August 15-16 in Uptown, with more than 100 festival vendors, a parade down Tryon Street, and headliners LeAnn Rimes, Sevyn Streeter, Sharon Needles, and Bianca del Rio.

Charlotte is also the host city for 2015’s Prides of the Southeast (POSE) Conference. The April event bring together Pride volunteers and sponsors from around the country for workshops on volunteer management, fundraising, and other key topics.

Charlotte community groups for the arts, fitness, and service

Charlotte is home to two choral groups, One Voice and the Gay Men’s Chorus of Charlotte, that perform at churches around the city. Fitness buffs can meet up with the Charlotte Front Runners & Walkers twice a week for 2- and 4-mile outings. The LGBT Community Center of Charlotte hosts a full slate of community meetings on topics including LGBTQ rights education, transgender support, mental health, interracial LGBT couples’ issues, and domestic violence education and prevention.

The community center also hosts the GayCharlotte Film Series, which holds screenings throughout the year and puts on a festival each spring. Both the center and Charlotte Pride offer volunteer opportunities for interested seniors.