SeniorAdvisor.com Blog > Blog for Families > History of the Sewing Machine

History of the Sewing Machine 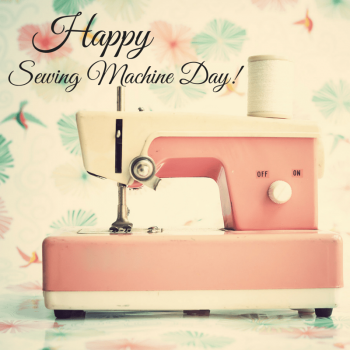 Share this image with your friends who love to sew by posting it on their Facebook page!

The Industrial Revolution produced many machines that made manufacturing faster, more uniform and easier. Among the machines that found their way into many American homes was the sewing machine. In honor of Sewing Machine Day this September 10th, we take a look at the history of the sewing machine and its huge impact on popular fashion.

The first sewing machine was designed to sew leather saddles and bridles, not clothing. Thomas Saint, an Englishman, registered his design in 1790 but did not promote it. Nevertheless, others built on his ideas. In 1804, Thomas Stone and James Henderson built a sewing machine in England and John Duncan built a machine for embroidery in Scotland. But it wasn’t until 1829 when Barthelemy Thimonnier built his French sewing machine that there was a workable model. Thimonnier built a factory and began producing machine-sewn uniforms for the French army until it was burned down, reportedly by tailors who feared the loss of business to this new mechanized industry.

In 1844, Englishman John Fisher built a sewing machine that combined many innovations that had been introduced in the intervening years. Americans Elias Howe and Isaan Singer (does his last name sound familiar?) built machines similar to Fisher’s. From this point, patent infringement lawsuits and new innovations ran rampant, until a Sewing Machine Combination was formed in 1856 with four companies pooling their patents to protect their ideas through 1877 when the last patent expired. New innovations continue to be incorporated in sewing machines to this day.

Clothing manufacturers put these new machines to immediate use, producing ready-to-wear clothing in standard sizes. Before the mid-1800s, all clothing was handmade with just one wearer in mind. This was either expensive or homemade and in both instances it was time-consuming. A man’s shirt can be sewn by machine in one hour, compared to fourteen and a half hours by hand. If you needed a new coat, you would choose the cloth, the style, the buttons, and your tailor or seamstress would have it ready in a week or two. Because clothing was expensive, people had small wardrobes, often just two or three outfits. Because there was no need for much storage space for clothing, there were no closets built into homes; a couple of pegs on the wall were adequate to accommodate most people’s entire supply of clothing.

Sewing Machines in the Home or in Factories

By the 1860s people began buying sewing machines for the home and many ladies became proficient in using them. Homemakers previously spent several days a month mending their family’s clothes; with the sewing machine this was reduced to a few hours per month. Ladies’ magazines began to include sewing patterns and tips on making and mending clothing. These home sewing machines were hand or treadle powered until 1889 when Singer patented the first electric sewing machine.

As clothing manufacturers grew, the production of clothing began to change from the home or home-based business of a tailor or seamstress to factories. The hours needed to produce a piece of clothing dropped dramatically and this brought down the cost of the finished product. The demand for cotton rose and it was planted in new areas of cultivation. More room was needed on trucks and trains to move the clothing from the factory to market. The sewing machine also influenced other industries such as furniture upholstery, draperies and curtains and books.

Today, most American have closets bulging with clothing to choose from and can go buy a new outfit for relatively little money any time they wish, thanks to the sewing machine.