Stepping up to raise a grandchild is a loving and selfless act. It’s also increasingly common. One in 10 grandparents 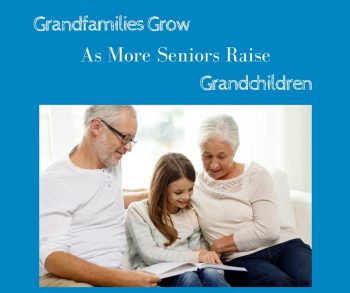 now live with their grandchildren, and more than 2.6 million grandparents are the primary caretakers for grandkids nationwide. The number of “grandfamilies” has increased by 7 percent since 2009, according to the Associated Press, with no signs of a slowdown in sight. Experts say there are many reasons for this trend, and many challenges facing these families. The good news is that policy makers and family advocacy groups are learning what grandfamilies need to succeed and are working with lawmakers and nonprofits to make necessary changes.

When parents can’t raise their children

Historically, some grandparents have taken in grandchildren when the parents were seriously ill, incarcerated, or deceased. Those are still reasons for grandfamilies today, along with repeated and longer military deployments for service members who are parents. But the main reason for the uptick is an epidemic of drug addiction among parents. About 78 Americans die each day from opiate abuse, and many more are simply unable to provide a safe, nurturing home for their kids due to addiction.

When grandparents step in

As a result, social workers and foster-care systems look to grandparents to care for the children, and most grandparents are willing to do so. The 2015 “State of Grandfamilies in America” report from Generations United says that 7.8 million US kids live with grandparents or other non-parent relatives. These caregivers provide $4 billion worth of care each year that would otherwise fall on taxpayers.

The upside of grandfamilies is that children thrive better with relatives than they do in foster care with unrelated caregivers, according to Generations United. The benefits include more stability, stronger connections with siblings and other relatives, and better bonds with their community.

The downside is that many seniors raising grandkids are living below the poverty line, living with a disability or chronic illness, or struggling to find proper housing for their new family. Saving money for retirement while providing for children can be difficult or impossible. Custody laws, which vary by state, often work against grandparents, who find themselves unable to enroll their grandchildren in school, take them to the doctor, or qualify for public programs that would benefit the children.

To make the system more grandfamily-friendly, some groups are pushing for change. In its 2015 report, Generations United recommends several changes at the state and federal levels, including tailored services that take senior and child needs into account, proper legal and healthcare support for grandparents who step in as foster parents, and changes to benefits program requirements to allow grandparents to access services for grandchildren.

GU has partnered with AARP and several other policy groups to create GrandFacts, a website with state-by-state fact sheets on grandfamily laws, resources, and statistics. Each sheet contains the names and contact information for family resource programs, benefits programs, education and special needs programs, and the state’s foster care agency. If you or someone you know is raising grandchildren, GrandFacts and your local area agency on aging are good places to find the resources you’ll need. Raising grandchildren is hard work, but the rewards can last lifetimes.