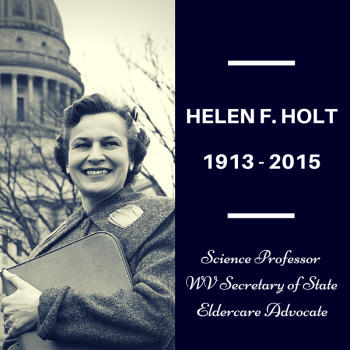 You may not recognize her name, but if you or anyone you love has lived in a senior care facility since the 1960s, you may owe Helen F. Holt some gratitude. When Holt passed away on July 12, 2015, at the age of 101, the media remembered her as a national advocate for safer, more efficient eldercare. Her service to seniors began in 1959, when President Eisenhower chose her to lead a federal mortgage-insurance program to build high-quality nursing homes. Holt spent the next quarter-century setting national standards for those facilities, from how they were built and paid for to how they were run.

For that alone, Holt deserves appreciation. But a look at her biography shows that nursing-home reform was just one of her many accomplishments and attributes. Here are 7 things you should know about Helen F. Holt:

1. She was smart and well-educated.

Holt started her career as a science professor, an uncommon occupation for women in the 1930s. She earned her zoology bachelor’s and master’s degrees from Northwestern University and taught at a Maryland women’s college.

2. She was a hard worker, even when she was dealing with personal loss.

Her husband, former US Senator and West Virginia House of Delegates member Rush D. Holt, died of cancer in 1955 without insurance for his family. Holt, who was then 42, stepped up to finish his term in the House of Delegates and went back to college teaching to support their son, daughter, and nephew.

3. She was on power brokers’ short lists.

Two years after she was widowed, Holt was appointed West Virginia Secretary of State, making her the first woman there to hold statewide office. After that term expired, she became an assistant commissioner in a role that included nursing-home oversight. That experience led to her appointment by President Eisenhower.

In her federal role, Holt was responsible for the construction of a thousand senior care facilities with a total of more than 100,000 beds.

5. She was responsive to seniors’ needs.

Holt helped expand the scope of senior care by helping to set up assisted living communities for people who didn’t need skilled nursing care. She also urged developers to meet with local seniors to learn firsthand what they needed in their care communities.

Along with her other work, Holt consulted with colleges and universities to build nursing-home administration degree programs. Today, nursing home administrators are among the most in-demand workers in the US, with demand growing “much faster than average,” according to the Bureau of Labor and Statistics.

Often recognized as a trailblazer for women in politics and government, she said her focus was simply on work that was “worthwhile.”

Current West Virginia Secretary of State Natalie Tennant remembered Helen Holt as a friend, a mentor, and someone who frequently called to share ideas. “I am a better leader because of her influence,” Tennant said in a press release. And Helen Holt’s influence and hard work made senior care safer and better for millions of Americans.