The High Cost of Burial 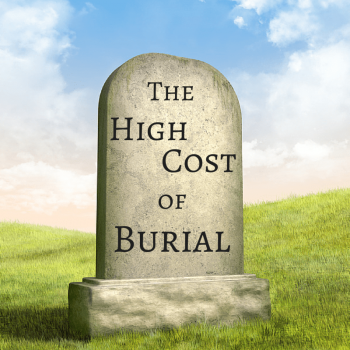 In America we don’t like to think or talk about dying. We all do it sooner or later, and that’s when you or a loved one gets a big shock: it is expensive to die. The average cost of a traditional funeral in America, including the funeral home, burial in a cemetery, and installing a headstone is between $7000 and $10,000. You probably didn’t know that and if you asked at the local funeral home, they wouldn’t tell you directly.

The truth is that most people don’t know what to do when someone dies, so they call a funeral parlor. Unfortunately, some funeral directors take advantage of the grief of the family who have just lost a loved one. They sometimes use guilt to sell a more expensive casket, which, let’s face it, is a box that will be put in the ground and no one will see after the 24 hours or so that it is used before burial.

The Myths and History of Embalming

Funeral home personnel will strongly advise you to have the body embalmed to “disinfect” it. Embalming, dressing and cosmetology are usually covered by the same fee, from $500 to $1290. If you want to avoid this extra expense you should state that in your will and tell your relatives. The fluids used in embalming are dangerous to the living and improper disposal causes contamination. “Formaldehyde and phenol,” notes the EPA, “present human health risks, if ingested in drinking water.” California, Idaho, Kansas, Minnesota and New Jersey require embalming only when the body leaves those states by airplane or train. Embalming provides no public health benefit, according to the U.S. Centers for Disease Control.

Before the Civil War families cared for the dead themselves. They bathed the body, dressed it and laid it out in the parlor for viewing by family and friends. They dug a hole somewhere on their land and buried the deceased with the help of a religious leader who was called in. The only expenses were for the materials to make the box and the gratuity to the parson. According to those who have recently performed these humble tasks for their deceased is therapeutic and can assist in the grieving process.

After the Civil War mortuary directors used embalming as their proof that they were skilled workers and therefore the correct intermediary between the living and the dead. Because President Lincoln’s body was carried by train from Washington D.C. to Springfield, Illinois, embalming gained legitimacy. But the process of embalming was originally used in medical schools to preserve cadavers for later dissection by medical students.

How The Funeral Consumers Alliance Can Help

The Funeral Consumers Alliance is a nonprofit organization that helps with providing dignified and affordable funerals for loved ones. It is the national organization for memorial societies that function on the local level. These memorial societies charge a nominal fee to join. They provide their members annual surveys of the local funeral homes and their costs for burial or cremation.

In addition they negotiate a special price for their members at one or more of the local funeral homes each year. This makes it possible for you to make an informed decision about what you are buying when you arrange for a funeral. The cheapest is to have the body immediately cremated and hold a memorial service later for family and friends. For those who still want burial, they recommend draping the cheapest casket in a flag for veterans or a quilt or blanket. The casket does not show, so it doesn’t matter how inexpensive it is. With a closed casket, no cosmetology is needed.