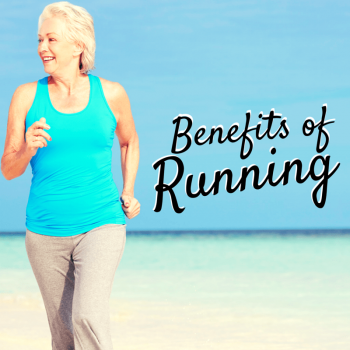 We all know that exercise is good for us. But aren’t we supposed to take it a bit easier as we get older? Not necessarily. Researchers are finding that regular running delivers an increasingly long list of health benefits to older people. Read on for six benefits of running, and then get ready to lace up your shoes.

A study that compared death rates among runners and non-runners over 15 years found that even short amounts of slow running (less than 10 minutes per day) correlate with 30% fewer deaths overall and 45% fewer heart-related deaths than among the non-runner group. The study, published in 2014 in the Journal of the American College of Cardiology, found that the protective effects were found among runners of both sexes, all ages, various body-mass indexes, and regardless of any pre-existing health conditions.

More efficient use of energy

In another study published in 2014, researchers from California’s Humboldt State University and the University of Colorado Boulder found that regular running helps older bodies maintain their aerobic capacity. The study compared regular runners and walkers of both genders. Not only did the runners outperform the walkers on a test of aerobic efficiency while walking, but the runners—with an average age of 69—performed as efficiently as the average 20-year old.

A German study of men between the ages of 66 and 87 found that those who got regular aerobic exercise were less prone to distractions caused by background noise. The results are part of a growing body of research correlating aerobic fitness and cognitive wellbeing.

The fact that exercise strengthens muscle isn’t news, and doctors have said for years that weight-bearing exercises like walking and running can cut the risk of osteoporosis. Strength and good bone density are especially important as we get older, because they can cut the risk of potentially disabling falls.

As with bone density and muscle strength, doctors have known for some time that there’s a link between regular exercise and good mental health. A 2004 study of sedentary men between the ages of 60 and 75 found that a 6-month program of regular aerobic exercise (starting at 20 minutes and working up to 60 minutes three times a week) reduced depression and anxiety symptoms in the active group, compared to the control group that did not follow an exercise regimen. The active group worked out on stationery bikes, but researchers concluded that endurance-based exercise, which definitely includes running, could serve as a mood booster.

Running can be done alone or with your dog, but it’s also great as a group activity. Many neighborhoods, senior centers, and fitness centers have running clubs tailored to different events and skill levels. Whether you’re training for a half-marathon or hoping to run a mile without stopping, there are probably other runners nearby who share your goal.

Don’t worry about finding yourself in a crowd of youngsters. According to the Atlantic, about half of all marathon finishers in the US these days are over 40, and many are well into their 60s, 70s, and beyond. In fact, on May 31, 92-year old cancer survivor Harriette Thompson became the oldest woman to finish a marathon, completing San Diego’s Rock n Roll Marathon in just under 7 and a half hours.