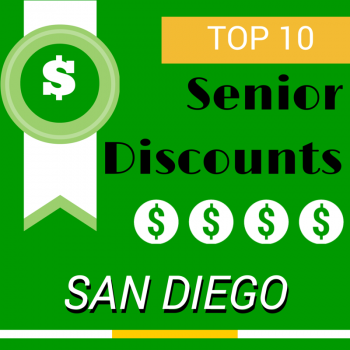 San Diego is such an appealing place that it’s easy to overlook the fact that it’s one of the nation’s ten most expensive places to live, according to data analysis by Kiplinger’s. To make the most of your money while enjoying seaside senior living, get in the habit of seeking out senior discounts like these:

Go natural with organic and bulk groceries at the Ocean Beach People’s Organic Food Market, which offers its senior members discounts every day. The co-op is also a good place to socialize, with live music on the weekends, Friday movie nights, and wellness workshops year-round.

Save on San Diego Metropolitan Transit System buses and trolleys with a reduced-fare card, available to riders age 60 and up, Medicare and SSDI recipients, and riders with disabilities.

3. Hop aboard a navy ship

The U.S.S. Midway Museum brings visitors aboard a decommissioned US Navy aircraft carrier, complete with 29 restored military aircraft. Take advantage of senior and retired-military discounts that are available in person and online. More than half of the Midway’s exhibits are wheelchair accessible, with American Sign Language, printed, and audio descriptive tour tools available.

The Old Globe Theatre in Balboa Park is a nationally renowned complex of three performance spaces that hosts an annual Shakespeare festival, touring shows, and new works by such artists as Steve Martin and Edie Brickell. Senior discount tickets are available for most shows. All three theaters offer wheelchair-accessible seating and assistive listening systems.

5. Enjoy a day at the beach

La Jolla Cove, one of the country’s best beaches according to travel site Tripadvisor, offers visitors of all ages something better than a discount: free admission. Visitors rate it as a great beach for walking and watching the local sea lions bask on the sand.

The Maritime Museum of San Diego celebrates ships from several eras. It’s home to the Star of India, the oldest working sailing ship, plus steam ships, submarines, and a recreation of a British 24-gun frigate. Seniors save $3 on general admission.

7. Be an engineer for a day

The San Diego Model Railroad Museum in Balboa Park, is the largest of its kind in North America and features recreations of the state’s rail lines. The museum offers a senior discount and free admission for all San Diego County residents on the 1st Tuesday of each month.

8. Discover life under the sea

Check out thousands of sea creatures up close at the Scripps Institution of Oceanography’s Birch Aquarium. Seniors save $4 on admission to exhibits on the sea life of Mexico, seahorses, whales, and the sharks and rays that live in the waters off La Jolla.

Get back to nature and take advantage of the senior discounts offered to county residents for RV and tent camping in 9 San Diego County Parks.

10. A bonus for grandparents

Every October is Kids Free in San Diego month. More than 30 local museums and institutions, including the zoo and Birch Aquarium, offer free admission, meals, or other perks to kids age 12 and younger. The program makes it easy to be the “fun” grandparent on a retiree budget.