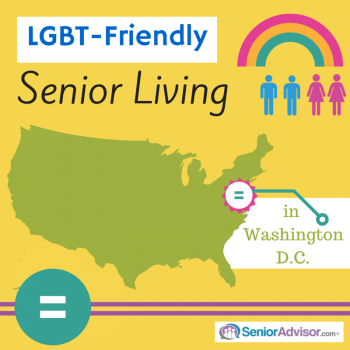 Retirement in Washington DC isn’t cheap, but the city is rich in arts, culture, history, and politics. The district offers a wealth of LGBTQ social opportunities; after all, The Advocate named DC America’s Gayest City in 2014, and neighboring Arlington, VA, made the top ten. Same-sex marriage is legal, and the district recognizes domestic partnerships as well. This is where policy is made, where influencing opinions and making connections are a way of life, so it’s not surprising that DC has an extensive slate of programs and services for LGBT seniors.

Among DC’s senior groups, AARP is–pardon the expression–the granddaddy of them all. The 40-million member advocacy group shapes policy on such issues as senior housing, health care, and social security. AARP has sponsored programs by SAGE (Services and Advocacy for GLBT Elders) and is working to raise the profile of LGBT senior issues.

The city government runs two agencies that serve the LGBT senior community. The DC Office on Aging has extensive resources to help residents with housing issues, disability services, transportation options, and LGBT-specific services. These are offered primarily through Whitman-Walker Health and include therapy groups, volunteer senior visitors, and legal aid.

The city’s Office of GLBT Affairs provides cultural competency and best practices training for businesses that want to better serve LGBT clients. The office also educates residents on their rights, maintains a list of community resources, and works on improving the quality of life for the city’s LGBT residents.

A full calendar at the DC LGBT Center

The DC Center for the LGBT Community offers a long list of senior programs, support and social groups, speakers on aging and other topics, and information about affiliated LGBTQ groups in the DC metro area. Weekly Monday morning coffee klatches at the center give seniors a chance to catch up with each other, while other groups offer job-seeking support, connect volunteers with community projects, and sponsor fun events.

If the center’s regular events aren’t enough to keep you busy, there’s also a packed calendar of special events such as the annual Human Rights Campaign National Dinner and the country’s third-largest yearly Pride celebration. The center also sponsors other metro-area LGBT groups, including Kindred and DC Coalition, which serve the African-American LGBT community, the DC Women’s Initiative, and groups for members of the Latino and Asian and Pacific Islander communities.

For people who’d rather choose a senior community than deal with home maintenance and chores, the area is home to half a dozen SeniorAdvisor.com Best of 2015 award-winning communities, as chosen by residents and families. Nationwide, winners represent about 1% of senior communities. In the DC area, the rate is closer to 6% and includes residences in Falls Church, Kensington, and Bethesda.

Affordable LGBT senior housing is under development, too. Mary’s House is expected to be ready for move-in by winter 2016. The small, home-like residence will offer private rooms and on-site staff.  Mary’s House developers have taken the issue of LGBT senior communities to the White House by participating in the first LGBT Elder Housing Summit in February. DC may be a pricey place to live, but the payoff is a strong and active LGBT community.

How Much Does Washington DC Assisted Living Cost?

How Much Do Washington DC Nursing Homes Cost?

Find assisted living in Washington DC near you