SeniorAdvisor.com Blog > Blog for Families > Caregiving > What’s a Power of Attorney and Why Do Your Parents Need One?

What’s a Power of Attorney and Why Do Your Parents Need One?

A power of attorney (POA) document is one of those things we’ve all heard we need but may not know exactly why. A POA is a helpful legal tool for keeping your parent’s bills and insurance premiums paid, investments managed and healthcare decisions handled according to their wishes if they can’t do so themselves. It does this by naming someone to act as your parent’s agent to make decisions on their behalf if they’re ever unable to make those decisions on their own. 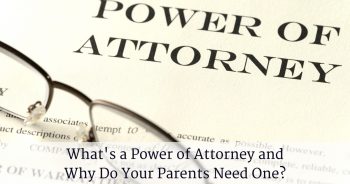 This sounds simple enough, but there’s a lot to know about powers of attorney before your parents sign one – and a lot of reasons to get one sooner rather than later.

When Should Your Parent Get a Power of Attorney?

This is the most important thing to know about setting up a POA: your parents must do it while they’re still of sound mind.

Many people mistakenly think the time to get a POA is when a parent becomes unable to make decisions due to accident, illness or stroke, but it’s not legally possible for them to sign that kind of document under those conditions.

In other words, if your parents wait until they need a POA, it will be too late to get one.

What Types of Power of Attorney Are There?

There’s also something called a springing power of attorney that only takes effect when certain conditions take effect — like your parent being unable to make decisions. However, CTLawHelp, a legal aid service based in Connecticut, says springing POAs often require more hoops to jump through before they can be used, like an affidavit showing the triggering event has happened, extra paperwork for banks and potential trouble getting the springing POA recognized in other states. No two situations are alike, but for most people, a durable power of attorney that clearly spells out the financial, medical and other decisions they want to entrust to their agent is the best option.

Where Should You Get the Power of Attorney?

You can get power of attorney documents online, have them notarized, signed and witnessed, and you’re done. However, it’s worth spending the money to have an elder law or family law attorney draft your parents’ power of attorney documents, because there are different types available and because banks and brokerages may challenge a cookie cutter POA (to protect your parents’ assets and privacy) and require extra documentation.

A blanket POA from the internet can also be unclear on some of the details that matter to your parents or other family members, and that lack of clarity can invite conflicts and even legal action to sort things out.

Also, as consumer advocate Clark Howard points out, meeting with a lawyer to draft your power of attorney can prevent questions later about whether your parent was mentally competent at the time the document was created – something that could be an issue with a POA from the internet.

Who Should Your Parent Choose as the Agent?

Your parents should name as their agent someone whom they trust to take care of the tasks described in the power of attorney document, and to do so only when your parents are unable to do those things for themselves. Your parents’ agent should have a history of good decisions with financial and healthcare matters, a history of following through with commitments and good communication skills to keep family and friends apprised of what’s going on if your parents ever can’t make decisions for themselves.

Many people choose a family member or a close friend as their agent, but not everyone has friends who can handle — or who want — the responsibility of being someone’s agent. In families with contentious relationships, choosing a relative as agent can create or deepen rifts.

For these reasons, some people choose to assign their financial power of attorney to a banker or lawyer rather than a relative, in exchange for a small fee if the agents ever have to exercise their power of attorney.

What Happens if Your Parent Doesn’t Have a POA?

Without a power of attorney in place, if your parent is ever incapacitated, getting things done will be more difficult at a time when you’re dealing with the stress of your parent’s health problems.

Here are a few things a properly written power of attorney can help your family avoid:

If your parents are still unsure whether they need a power of attorney, make sure that they (and you) don’t believe any of these myths about POAs.

Remember that there are also other legal documents that your parents — and you — should get before you need them, so your family has more information and less stress in a crisis.

Senior Phone Programs: A Way to Fight Loneliness
What Is Adult Foster Care?