SeniorAdvisor.com Blog > Blog for Families > Caregiving > How to Protect Your Parents’ Personal Data After the Equifax Hack

How to Protect Your Parents’ Personal Data After the Equifax Hack

Even before thieves stole personal data from Equifax on 145 million Americans last summer, seniors were already at high risk for identity theft. Now, identity theft and data security experts say the risk if even higher. 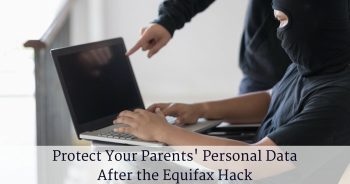 Here’s how to help your parents protect their personal data and their credit after the Equifax data breach.

Why Older Adults Are at Risk

The Center for Identity at the University of Texas at Austin describes people age 60 and older as “extremely vulnerable to identity theft.” The center points to data showing that more than a third of people age 50 and up have been victims of identity theft, and nearly half have been defrauded.

Why are older adults at such risk? Scammers know that many retirees have available credit, benefits like Medicare and nest eggs that they can take advantage of. Older adults are also targeted because thieves assume they’re not as tech-savvy as younger computer users. Sadly, thieves also know that our financial decision-making skills tend to decline with age and that cognitive conditions like early dementia make some older adults easy to scam.

Besides the age-related risks, everyone with a credit card, credit history and a Social Security number is at some risk of identity theft these days. Organized criminals know there’s lots of money to be made by stealing and reselling people’s financial and personal data.

Which Equifax Data Was Stolen

The short answer is, a lot. When the company first announced the data breach, it said that birthdates, home addresses, names and Social Security numbers for as many as 143 million North American consumers had been stolen.

After investigators looked into the breach in more detail, the number of victims rose to more than 145 million, and some victims’ credit card and driver’s license numbers were exposed, too. As Winnie Sun wrote at Forbes, “That’s everything needed to open a credit account in your name, make false medical claims and more.”

It may not be possible to ever tally the number of people who suffer identity theft as a result of the Equifax breach because there have been other breaches at major insurers and retailers in recent years. Nevertheless, security experts expect to see more victims — and some people may be targeted more than once. One woman in Seattle and her attorney have been trying to sort out 15 separate instances of identity theft they think stemmed from the Equifax breach.

Why the Equifax Hack Puts Your Parents at an Increased Risk

The major issue is the exposure of Social Security numbers, names, addresses, and birthdates. Even without credit card information, fraudsters can use this information to go online and create bank, credit card, and retail customer accounts with your parents’ information. If that happens, your parents could face collection calls and damaged credit.

If your folks are 65 or older, their Social Security number can also help thieves file fraudulent Medicare claims in their name. And if your their credit card data was exposed in the breach, they could face fraudulent charges on those cards. To make matters more frustrating, experts say that the effects of the Equifax breach could last for many years because it’s so difficult and rare for Americans to be able to change their Social Security numbers.

What does this all mean for your parents? If they’re like most of us, it means they’ll need to take a more active approach to keeping an eye on their personal data.

Which Steps You Can Take to Help Your Parents Protect Themselves

There are four major areas to keep an eye on: accounts, credit access and identity, credit cards and medical identity.

You may want to talk to your parents about:

Account takeover fraud can take many forms, from hijacking cell phone accounts to changing the passwords on bank accounts and retail customer accounts. In each case, the thieves are after money or access to stored payment data – like the credit card numbers your folks might have on file with their favorite online stores. To protect themselves, your parents should:

Because so much data was exposed in the Equifax breach, consumer advocates are strongly urging Americans to request credit freezes at Equifax, Experian and TransUnion, the big credit reporting agencies. A credit freeze keeps data thieves from applying for new credit in your parents’ names, and the freeze doesn’t affect their existing accounts.

Depending on which state your parents live in, there may be a fee (usually in the $3-10 range) at each agency to freeze their credit, but it’s a small investment that can yield big peace-of-mind rewards. Each agency will give you a personal identification number (PIN). It’s very important to keep the PINs somewhere safe because your parents will need them if and when they “thaw” their credit profiles — for instance, to buy a new car or apply for a new credit card.

Your parents should check their credit card and bank account statements each month for unfamiliar charges. If they see any, they can contact the merchant and the bank or credit card issuer to get the charge explained or removed. If your folks check their account activity online, they can call the bank or card issuer as soon as they see a suspicious charge. Some card issuers and banks will also set up text alerts to let customers know if unusual charges are made to their account.

Your parents (or you, if they need help and give you permission) should check all medical bills and explanations of benefits. If there are charges that don’t look familiar, ask the doctor’s office or hospital to explain them. If your folks get explanations of benefits for services they didn’t use, they should report that right away to Medicare and the doctor or hospital. You can learn more about signs of medical identity theft from the Federal Trade Commission.

Your parents can protect their identities and credit even if they become unable to make their own financial decisions by setting up a durable power of attorney while they’re in good health. This type of document allows a person they choose to handle decisions on their behalf, including managing bank, credit card and history accounts. For more information on durable powers of attorney and other documents to protect your parents, you can contact a reputable elder law attorney.

7 Gifts Family Caregivers Should Give Themselves This Holiday Season
People’s Choice: Announcing the SeniorAdvisor.com’s Best of 2018 Senior Living Winners