SeniorAdvisor.com Blog > Blog for Families > Alzheimer's Care > Should You and Your Parents Stop Drinking Diet Soda?

Should You and Your Parents Stop Drinking Diet 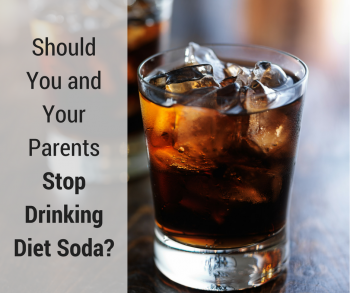 A recent long-term study found a strong correlation between drinking diet soda and increased risk of stroke and dementia. The report, published in the medical journal Stroke using data from the multi-year Framingham Heart Study, concluded that “artificially sweetened soft drink consumption was associated with a higher risk of stroke and dementia” among study participants, even after controlling for age, fitness, diet, smoking, and other factors. If you’re wondering if you and your parents should stop drinking diet soda, dietitians say the answer is yes.

Whether you drink one diet soda a day or a case a week, stopping appears to reduce your risk of stroke. Dietitian Christy Brisette, writing in the Washington Post, recommends cutting back gradually on diet soda if you’re drinking several a day so your cravings don’t sabotage your healthier new habits. Replacing soda with water is the simplest (and least expensive) option, but people who drink diet soda for the caffeine may struggle with that switch. Some people find it easier to drop diet soda in favor of green tea or coffee because they also contain caffeine, and coffee and green tea can also actually reduce the risk of stroke, according to a 2013 study of more than 80,000 adults in Japan.

Other ways to protect your health

Of course, diet soda is far from the only risk factor for stroke and dementia. High blood pressure, diabetes, poor heart health, smoking, and increasing age all raise the risk of stroke and dementia. Healthy eating and exercise habits are important for reducing your risk. So is knowing the early signs of dementia and the warning signs of stroke.

In some cases, dementia caught in the early stages can be treated for a while with new drug therapies. That’s why it’s important to see your doctor if you or your family members notice disruptive memory loss, loss of ability to plan and solve problems, forgetfulness about the time and date or your location, or trouble with speaking and writing.

Likewise, stroke care has come a long way in recent years, and doctors urge people to call 911 immediately when they show any of the following signs:

Response time is critical, because clot-busting drugs delivered within an hour can reduce the severity of the stroke’s effects. Even if the symptoms go away, seek emergency care. Symptoms that come and go can be signs of a TIA (transient ischemic attack) or “mini-stroke,” which can signal that a major stroke is soon to come.