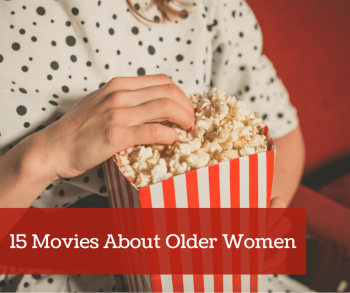 Hollywood’s always been much more interested in the young than in the stories of seniors. It can be frustrating as you get older to never see anyone on the screen your own age, and it’s a problem that’s even worse for women. Aging actresses famously have a hard time continuing to find good movie roles into their golden years, which means aging female viewers see less of themselves in the movies they watch.

But now and then, we get movies that are an exception to the rule. If you’re tired of only seeing the exploits of 20 and 30-somethings when you watch a movie, check out some of these movies that prominently feature older women.

Calendar Girls is a rare film in which almost the entire main cast is made up of older women. The comedy, loosely based on a true story about women deciding to raise money by posing nude for a calendar, may not be for everybody, but it was a hit that’s gained a good number of fans.

Harold and Maude is a strange, but moving movie about the relationship between a young man obsessed with death and an older woman who knows how to enjoy life. Maude is a fascinating character in her late 70s, making her a great example of a complex older woman in film.

If you’re willing to branch into foreign film, then check out Over the Hill Band. The Belgian film follows the story of an aging woman who’d been in a band in her youth and convinces her former bandmates to join her for a revival of the band.

Dealing with a subject matter likely familiar to many senior women, The Stone Angel follows a woman who’s just learned she’s likely to be moved to a nursing home in her trip down memory lane. The drama starring Ellen Burstyn isn’t the best film to turn to for a warm, fuzzy experience, but for a strong performance and a story about aging, it’s worth checking out.

Away from Her tackles the difficult subject of Alzheimer’s – a disease many seniors will either face themselves or watch loved ones deal with. Starring Julie Christie, it explores how the illness and a move to a memory care facility affects the lead character’s relationship with her spouse.

Starring some of the most respected older actresses of our era, including Judi Dench, Maggie Smith, and Penelope Wilton, The Exotic Marigold Hotel follows the experiences of a group of retirees who choose to move to India for their retirement and live in a hotel.

45 Years is about a woman whose relationship with her husband takes an unexpected turn as they approach their 45th anniversary. It’s a romantic drama that was well regarded by critics and explores how the past can come back to influence relationships even many years later.

Tackling the subject of what it’s like to be an aging actress, Clouds of Sils Maria stars Juliette Binoche as an actress asked to return to the play that launched her career – but this time in the role of an older character. The change in roles forces her to face how her career has changed in the years since her first run-in with the play.

The recent comedy starring Lily Tomlin centers on a grandmother figure unlike those usually seen in the movies. Tomlin plays a broke lesbian who goes on a mission throughout the city of Los Angeles to help her granddaughter raise money through often unconventional means. The film helps expand what the role of “grandmother” can look like in a Hollywood movie.

The heart wrenching French film Amour is another look at a relationship between seniors who have been together for many years. After Anne experiences a stroke, her husband is thrust into the role of caregiver and the film follows the experiences of the couple as they move into this new phase in their relationship. Emmanuelle Riva, who plays the role of Anne, is the oldest woman to ever be nominated in the Best Actress category of the Academy Awards.

Mrs. Palfrey at the Claremont follows the story of an elderly woman who meets a young writer after having an accident outside his home and strikes up a close friendship with him. The movie stars Joan Plowright who won an AARP award for her portrayal as Mrs. Palfrey.

A biographical drama based on the life of the novelist Iris Murdoch, Iris moves back and forth between a look at her life and relationship in her younger years and how it changes in her later years as she deals with Alzheimer’s and is cared for by her husband. It’s another film on the list that deals with the common experience spouses have of one falling into the role of caregiver late in life.

The Lady in the Van is another movie loosely based on life, about the relationship between the writer Alan Bennet and the older homeless woman who lived in a van in his driveway for years. The film stars Maggie Smith who received critical acclaim for her performance.

The popular 80’s comedy-drama follows the story of Miss Daisy’s relationship with her chauffeur, and eventually friend, Hoke. The film stars Jessica Tandy as Miss Daisy and examines the prejudices of the 60’s and 70’s alongside the touching relationship of the two characters as Miss Daisy ages.

Starring Blythe Danner, I’ll See You in My Dreams is about an older woman whose life has become solitary since her husband’s passing. Until, that is, she meets and begins affairs with two very different men and begins to experience more excitement in her life again.

This list ranges from heart wrenching dramas to fun comedies, to plenty of movies that fall somewhere in the middle. While Hollywood still clearly has some work to do in featuring older women in movies in general, and older women of color in particular (one thing noticeably missing from the list), people interested in seeing examples of senior women on the screen do have some options. For other movie recommendations check out these 6 memorable movies about grandparents and these 10 movies important to the silent generation.