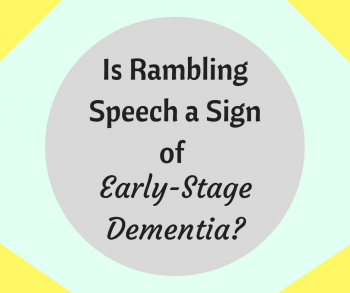 Researchers at Massachusetts General Hospital in Boston recently said they’ve found subtle changes in speech and writing patterns that may identify Alzheimer’s disease in its earliest stages—as early as ten years before a formal diagnosis. These clues include rambling speech or writing combined with a reduction in the variety of words used. By finding these early clues to Alzheimer’s, the researchers hope they can eventually give doctors a way to screen patients and start treatment earlier, when it’s most effective.

How researchers found the language-dementia connection

The scientists identified the language changes by studying works by authors who were later diagnosed with Alzheimer’s, to compare their earlier style to their later writing. They also compared late President Ronald Reagan’s press conference transcripts from early and late in his presidency. Based on their analysis, the researchers found that “repetitive and vague phrasing” is a possible sign of dementia, and so is “using more fillers and empty phrases.”

It’s important to note that if you or your parents have a habit of telling long, rambling stories, that doesn’t mean you’re definitely going to develop dementia. The clue is in the change over time from stories with a point to those that ramble without end or real meaning—especially if the variety of words used is also declining.

What are some other early signs of dementia

There are other early signs of dementia you can be alert for, too. The Alzheimer’s Association lists ten dementia signs to watch for – with the understanding that everyone has occasional moments of forgetfulness. Dementia may be a possibility, though, if your loved ones often:

Other warning signs for dementia include a reduction in socializing and an increasingly negative, anxious, depressed, or angry attitude.

For patients in the early stages of dementia, cholinesterolase inhibitors can slow down the progress of memory loss, although they can’t repair the losses that have already occurred or stop the disease from progressing. For people with later-stage dementia, there is a drug called memantine that can help with day-to-day cognitive functioning. As with any medication, these dementia drugs may not work for every patient. Your doctor can give you more information about treatments that may help your loved ones with dementia.

If you’re looking for the best value options for senior care, be sure to visit SeniorAdvisor.com to see reviews, ratings, and prices for Alzheimer’s Care  and more.

To learn more about dementia care visit the SeniorAdvisor.com blog.

The Growth in Senior Shared Housing
What Are Those Red Dots on the Skin?