SeniorAdvisor.com Blog > Blog for Families > The Movement Encouraging a Healthy Approach to Dying

The Movement Encouraging a Healthy Approach 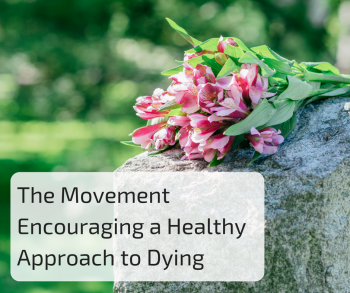 Everyone’s going to die. We all know it, and most of us spend as much of our life as possible avoiding thinking about it. Even when we do deal with the death of a loved one, many of the routines and traditions around death in our culture are based on not facing its realities.

People spend lots of money so that their deceased loved ones can be made to look alive during viewings. The idea of facing a dead body in its natural form is often associated with terror and disgust in our culture.

A movement is brewing in the US devoted to giving people a new view on death – one that’s based on treating it as a natural part of life.

The Order of the Good Death

The Order of the Good Death is a community of people devoted to helping others broaden their views of what death means. The movement is headed by Caitlin Doughty, a mortician that runs an alternative funeral home in Los Angeles.

The organization’s mission, according to the website, is about “making death a part of your life…staring down your death fears- whether it be your own death, the death of those you love, the pain of dying, the afterlife (or lack thereof), grief, corpses, bodily decomposition, or all of the above.  Accepting that death itself is natural, but the death anxiety and terror of modern culture are not.”

It may sound macabre to you, but that’s only because we come from a culture that treats death as something macabre. The Order of the Good Death seeks to change that.

What the Order of the Good Death Does

In practice, the Order of the Good Death spreads their message in a few key ways.

They provide education on death and historical and cultural rituals associated with it.

Through both the website’s blog and the playful videos Doughty shares on various topics, The Order of the Good Death educates followers on death-related topics ranging from death rituals throughout history, current options for dealing with a body after death, and jobs in the death industry.

They help people to understand their options when they or a loved one pass.

Many families go through the motions common in our culture each time a loved one dies because they feel like it’s the way death is supposed to be handled. The Order of the Good Death wants to let people know they have other options.

Have you ever questioned why bodies in the US are routinely embalmed? You may think it has to do with health hazards, but really it’s not necessary. It’s a costly procedure people have done simply because it’s custom to do so.

The Order of the Good Death is raising awareness of alternative options, like natural burial, cremation, and home funerals. These options cost less and provide families with a more personal, intimate method of honoring their dead.

Encourages a more “death positive” approach to that inevitable part of life most of us dread thinking about.

Death doesn’t have to be seen as a bad thing. Mourning and loss are necessarily part of the process, and the Order of the Good Death in no way seeks to discount that aspect of it, but they do seek to remove some of the stigma and discomfort that surrounds how we view death. They insist that we can respectfully honor our loss without seeing the process as something creepy or distasteful.