SeniorAdvisor.com Blog > Blog for Families > Assisted Living > The Senior Heroes We Need Now: How the Golden Girls Still Inspire Us

The Senior Heroes We Need Now: How the 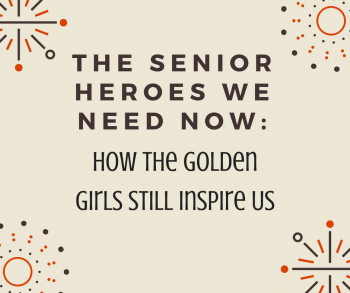 Superheroes are big business these days, with Marvel and DC turning out film after film to keep “the youngs” entertained. Superheroes are becoming more diverse, but there’s one group of folks that’s not typically part of the crime-fighters’ cadre: seniors. At ComicCon in October—where fans, stars, and writers gathered to talk superheroes, dress up, and shop—one company bucked the trend by selling Golden Girls action figures, based on the 1980s sitcom that wasn’t about fighting crime but about friendship.

The boxed set featuring Blanche, Rose, Dorothy, and Sophia was the surprise hit of the show and sold out quickly. Target was the only retailer who managed to get any and they sold out within a couple of days, too. Funko, the Washington-state based company that made the Golden Girls figures, doesn’t plan to make more, so if you’re determined to own a set you’ll need to spend anywhere from $200 to $400 to buy from someone who’s reselling theirs online.

The coveted action figures may be out of reach, but there are other ways to treat Golden Girls fans. Pop! TV offers its own line of Golden Girls dolls, and the original shows are available on DVD and as streaming video on Amazon. A quick online search also turns up lots of Golden Girls t-shirts, mugs, and even throw pillows decorated with the floor plan of the Golden Girls’ Florida home.

Why ‘The Golden Girls’ is still such a draw

The show ran from 1985 to 1992 and presented a thoroughly modern scenario – four older women on their own after divorce and widowhood, living independently in Miami. Blanche the Southern Belle kept up an active social life, while Rose embodied ‘Minnesota nice.’ Dorothy and her mother, Sophia, traded sarcastic barbs.

The show painted a realistic and overall positive picture of aging, complete with dating and romance, but didn’t gloss over the aches and pains of growing older. Today, the show remains popular with TV aficionados, especially entertainment writer Michael Musto, who has written about Golden Girls LGBT fans. Other writers have praised the show for being well ahead of its time on issues like late-in-life marriage, age discrimination, senior poverty, LGBT rights, interracial families, and disability. Whatever issues came up in each episode, the show’s biting wit and focus on the importance of friendship drew in millions of viewers and earned the cast and crew dozens of awards.

For fans of the show, the best way to capture its spirit is to make sure that your parents and other older loved ones have the daily social support they need. If friends and family aren’t around often, you may want to contact the nearest senior center to find out about weekly hours, special social events, and transportation options to keep your folks connected and socially engaged. Another option is to hire in-home help for companionship, and yet another is to consider a move to an independent living or assisted living community where there’s always something to do and potential friends to talk to.