An Unexpected Second-Career Option: Hit the 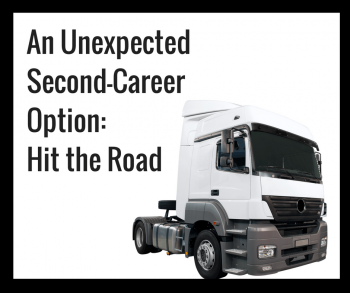 A lot of us dream about a retirement filled with road trips, sightseeing, and new adventures. For a growing number of retirees, it’s their daily reality—and they’re getting paid for it. These days retirees are prime candidates for commercial truck driving. Retired “work-campers” use their RVs to mix tourism and temporary jobs around the country. Older city dwellers are driving for Uber, Lyft, and other rideshare services. For seniors who can drive, retirement on the road is a realistic option.

NPR’s StoryCorps recently interviewed two senior women working as truck drivers, still on the road when many people are ready to retire. They’re far from alone. Seniors have been turning to trucking for more than a decade to supplement their income and stave off boredom. Now, trucking companies are seeking out retirees to meet growing demand for new truckers, who have to take a course and qualify for a commercial driver license before they can take the wheel. There are no upper age limits for truckers, which makes trucking a popular job option for older workers who have been forced out of other careers

Whether the lack of age restrictions is a good thing is a matter of debate. CBS News recently aired a report that older truck drivers are more likely than younger drivers to be involved in accidents. However, for seniors with good driving skills and a love of the highway, truck driving is a way to stay busy, see the country, and earn more income.

More seniors use their RVs to get to work

For those who don’t want to drive full-time, another trend is catching on – traveling the country in RVs to camp and do short-term work assignments at locations around the country. The New York Times recently featured retirees who are part of the “workamper” movement. Their work assignments can include everything from warehouse work during the holiday shopping season to beet harvesting. Others do seasonal stints in national parks or with professional sports teams during their preseason training. Some take breaks to visit family, while others only choose work assignments in places with good weather.

Workampers agree that it’s not a way to get rich, because most of the work pays minimum wage or close to it. But for seniors who want to travel while keeping their expenses down and earning extra money, workamping can be the difference between seeing the country and sitting at home.

Nearly a quarter of people who drive for rideshare services like Lyft, Uber, and local services are over 50, according to CNBC. Like the trucking industry, rideshare companies are going out of their way to bring senior drivers on board, offering them a flexible way to make additional money in retirement. One senior rideshare driver interviewed by CNBC said he aims to earn $30 per hour and $150 a day. When he meets his daily target, he can log off the service for the day. He also said he doesn’t have to drive at night.

Read more about retirement planning on the SeniorAdvisor.com blog.

More Doctors Recommend B12 for Healthy Senior Minds
Selling Your Home vs. Renting It Out To Pay For Senior Care