How Simone Biles’ Grandparents Built a 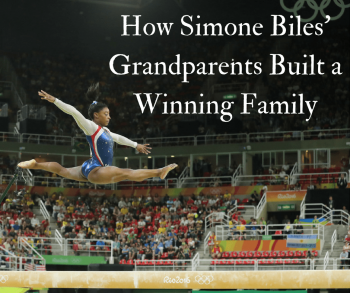 Grandparents who find themselves raising their grandchildren can take inspiration from Ron and Nellie Biles. You may not recognize their names, but you’ve probably heard of their daughter, Olympic gold medalist Simone Biles. She and her sister, Adria, were adopted as young children by their grandfather Ron and step-grandmother Nellie, after a tumultuous start in life due to their birth mother’s struggles with addition. Here’s how Ron and Nellie embraced their role as parents to their grandkids, and how other grandparents can do the same when they’re the ones raising their grandchildren.

Ron and Nellie Biles were able to legally adopt Simone and her sister because the courts had terminated the parental rights of Ron’s daughter. That gave the Biles the legal standing to enroll the girls in school, take them to the doctor, and other necessities. Grandparents without legal custody may run into problems accessing education and healthcare, depending on the laws in their state. Generations United, AARP, and several other national groups have a library of GrandFacts sheets for each state, that you can download and use as a road map to getting the resources your family needs.

Nellie Biles has spoken in interviews about the benefits of counseling for her whole family after Simone and her sister came to live with them. Some form of counseling, even for a short time, can help grandparents and grandkids adjust to the new family arrangement, help kids (and adults) adapt to their new living situation.

It’s important to let children try new activities, pursue them when they’re interested, and move onto something else if they choose. Ron and Nellie supported Simone’s interests by signing her up for a gymnastics class at age six, and they kept supporting her as her skill and interest grew. After-school activities, rec center classes, and parks department programs are affordable options for trying new things.

For grandparents who are used to the special relationship they have with their grandchildren, parenting can bring some tough changes. Kids typically show their “warts and all” side to their parents, so if you’re filling that role you can expect to relive the limit-testing, forgotten chores, and teen attitudes you thought you were done with. Take a deep breath, set appropriate expectations and limits for the kids’ behavior, and remember you’re not alone. Even Nellie Biles admits that Simone can be “a very stubborn” teen.

Despite the difficult circumstances that often lead to grandparents raising their grandchildren, the arrangement has many benefits for kids, according to research city by Generations United. Among the outcomes are better mental health, better family stability and long-term connections to siblings, and a more stable educational and social environment.

The benefits for grandparents include the joy of spending time with their grandkids, the relief of knowing the children are safe, and even some appreciation. Biles, despite her status as the world’s top gymnast and a media sensation, considers Nellie “the most important person in the world.”

Learn more about the joys and challenges grandfamilies face on the SeniorAdvisor.com blog.

The Gaming Grandma Proves Video Games Are For Everyone
From Mini-Meditations to Vacations: Caregivers Need Breaks