SeniorAdvisor.com Blog > Blog for Families > Senior Health & Fitness > How Does Your State Rate for Senior Health?

How Does Your State Rate for Senior Health? 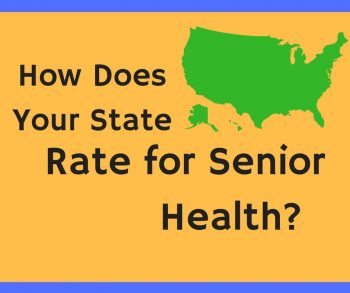 United Health Foundation’s 2016 Senior Health Report rates all 50 states for senior health, based on factors like lifestyle, clinical care, public policies, and community resources as well as senior health outcomes. The 148-page report has lots of data to show what states are doing to protect senior health and where they need to improve. How does your state stack up?

Massachusetts led the states in 2016 for overall senior health. The state rose from 6th place last year based on marked reductions in smoking and physical inactivity among older residents. Rounding out this year’s top five states for senior health were Vermont, New Hampshire, Minnesota, and Hawaii. The states with the lowest overall senior health rankings for 2016 were Louisiana, Oklahoma, Mississippi, Arkansas, and West Virginia.

The five states with the lowest percentage of four- and five-star beds were Louisiana, Texas, West Virginia, Kentucky, and Oklahoma.

States with the most active seniors

The report asked seniors in reasonably good health about their fitness and activity level and rated each state based on the percentage of survey-takers who reported no activity outside work within the previous month. The lower the percentage, the better the state’s senior activity rating. The top five states for active seniors in 2016 were Colorado, Oregon, Utah, Washington, and Idaho.

States with the fewest seniors living in poverty

Poverty is a health risk for seniors because it limits their ability to get medical care, nutritious food, and safe housing. Dealing with poverty can also raise stress levels over the long term. States with the lowest senior poverty rates in 2016 were Alaska, New Hampshire, Wyoming, Utah, and Indiana. States with the highest senior poverty rates were Mississippi, New Mexico, Louisiana, New York, and Kentucky.

States with the best rates of prescription drug coverage

The UHF report used Kaiser Family Foundation data to see which states had the highest percentages of good-quality prescription drug coverage for adults age 65 and up. The national average is 85%. The top five states in 2016 were tied at 88%: Iowa, Connecticut, Minnesota, New York, and Ohio. Maryland had the lowest percentage of covered seniors (76%). The other four states with the lowest coverage rates were Alaska, New Hampshire, Virginia, and Wyoming, all with 79%.

States were the most seniors get their flu shot

Medicare covers a yearly flu shot for beneficiaries, and doctors and public health officials strongly recommend it for seniors. That’s because seniors are more likely to be hospitalized and to develop fatal complications from the flu. The top states for flu vaccines among seniors were South Dakota, West Virginia, Kentucky, North Carolina, and Missouri. At the bottom of the rankings were Alaska, Florida, Nevada, Wisconsin, and Idaho.

The report has state rankings for dozens of measures, including senior volunteerism, dental care, smoking, food assistance, home health care, and more. You can read the entire document here. You can also find highly rated senior care resources around the country in the SeniorAdvisor.com Best of 2016 Awards.