Which Types of Dementia Are Hereditary? 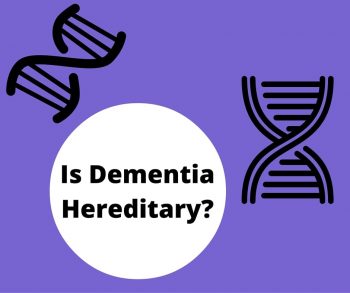 Among the many questions people ask after a dementia diagnosis is whether other family members are at risk for the same condition. In most cases, the answer is no or it’s not clear. Some rarer types of dementia can sometimes be hereditary, and some health habits shared by family members can raise the risk of developing non-hereditary dementia. Here’s what you need to know about hereditary risk for different types of dementia.

Experts say that in the overwhelming majority of cases, Alzheimer’s disease is not passed down to patients’ children and grandchildren. The National Institute on Aging says fewer than 5% of all cases are early-onset Alzheimer’s, which affects people between the ages of 30 and 60 and often has a direct genetic component. Children with one parent who carries a genetic mutation for early-onset Alzheimer’s have a 50/50 chance of developing the disease.

The remaining 95% of Alzheimer’s cases develop in older adults and don’t have a clear-cut genetic cause. Scientists have found at least one gene that may play a role in people’s risk for getting the disease. Apolipoprotein E (APOE) can reduce Alzheimer’s risk, increase it, or not affect risk at all, depending on which variant of the APOE gene is present.

Lewy body dementia (LBD) is a disease that’s caused by the buildup of abnormal deposits of lewy bodies – alpha synuclein, in technical terminology – in the brain. The buildup of Lewy bodies affects the brain’s chemistry causing symptoms of dementia and uncontrollable physical movements.

Lewy body dementia is believed to affect over 1 million people in the United States, but it’s also believed to be widely undiagnosed due to how similar the early symptoms are to other forms of dementia. LBD is most common in seniors, usually appearing at some point after the age of 50, although cases occurring in younger people do also exist. Like Alzheimer’s, LBD is a progressive disease, meaning those who are diagnosed with it can expect the symptoms to get continually worse over time. About 10% of all Lewy body dementia cases are caused by a genes passed from parent to child.

Heredity and the two types of Lewy body dementia

LBD can be divided into two primary types: dementia with Lewy bodies and Parkinson’s disease dementia.

Cases of Lewy body dementia can vary considerably for different patients, which is part of why doctors find it so challenging to diagnose effectively. Some of the symptoms you or a loved one may experience if you have LBD are:

Researchers say heredity and family history play a role in up to half of cases of frontotemporal dementia (FTD), which affects speech, social behavior, and executive functioning more than memory. Scientists have identified five gene mutations that contribute to these types of dementia. Due to the genes involved and half of people whose parents have FTD will develop it as well. The Memory and Aging Center at the University of California, San Francisco says that people with a family history of FTD may consider talking with a genetic counselor about genetic testing options, benefits, and potential downsides.

Although FTD isn’t as widely known as Alzheimer’s, it actually affects more people than Alzheimers during middle age. Among the symptoms of FTD are behavior and personality changes like a sudden onset of apathy, new impulsive behavior – including potentially inappropriate behavior, and compulsive behaviors such as hoarding. Another type of FTD has symptoms that include trouble finding words, speaking in a normal cadence, or new pronunciation difficulties. Muscle spasms and poor motor coordination can also be signs of FTD.

FTD is a gradual disease that worsens over the course of about 8 years, depending on the exact type. FTD isn’t curable, but exercise, proper sleep habits, speech therapy, and psychiatric medications may help patients function better for a longer period of time.

Vascular dementia, which accounts for some 30% of dementia cases in adults over 65, is usually caused by small strokes that go undiagnosed but cause damage by restricting blood flow to the brain. The Alzheimer’s Association says that vascular dementia looks similar enough to Alzheimer’s disease that the two are often confused.

Some other hereditary conditions can indirectly raise the risk of vascular dementia. These include heart disease, diabetes, depression, and high blood pressure. Alcoholism isn’t hereditary but it often runs in families, and it’s also a risk factor for vascular dementia–as well as a permanent condition called substance-induced persisting dementia. If you have a family history of any these conditions, talk to your doctor about lifestyle changes you can make and medications you may need to reduce the overall risks to your health and brain function.

Huntington’s disease is a relatively rare progressive brain disease that has a clear genetic cause. Children of parents with Huntington’s have a 1 in 2 chance of developing it as well. Huntington’s symptoms usually show up in middle adulthood, between the ages of 30 and 55, although about 10% of Huntington’s patients show symptoms before they’re 20 years old. The disease runs its course over the course of 10 to 25 years. Because Huntington’s causes nerve damage in the brain, memory, mood, personality, movement, and speech are all eventually effected.

According to the Huntington’s Disease Society of America, the gene that could lead to the disease exists in every person – but only people who inherit a faulty copy of the gene from a parent will go on to develop Huntington’s. The disease affects men and women in roughly equal numbers. Members of all races and ethnic groups are at equal risk for developing Huntington’s.

When someone is diagnosed with Huntington’s, their adult children and grandchildren have the option to get genetic counseling and testing to see if they will develop the disease, too. This is a hard choice to make. On the one hand, there’s no cure for Huntington’s, so a positive test result could be difficult to live with for someone who doesn’t have symptoms yet. On the other hand, being able to plan for long-term care and make childbearing decisions are reasons that some relatives of Huntington’s patients decide to get tested. HDSA operates testing centers for people at risk for Huntington’s that provide necessary counseling, testing, and follow-up support.

Creutzfeldt-Jakob disease is a rare and fast-progressing type of dementia. The National Institutes of Health says that about 300 new cases of CJD are diagnosed in the US each year. The overwhelming majority of CJD cases are not hereditary – they either show up in people without risk factors or, extremely rarely, are caused “by exposure to brain or nervous system tissue, usually through certain medical procedures.”

At most, ten percent of US CJD patients have hereditary factors for the disease. Some of these people test positive for a CJD-related genetic mutation. Others may not test positive but have a family history of Creutzfeldt-Jakob disease. So far, there’s not a cure for CJD, nor are there effective treatments for its symptoms. Palliative care is the main focus for people with CJD dementia. If someone in your family develops CJD, supportive hospice care is important, not only for the patient but for emotional support and counseling for your family as well.

According to the National Organization for Rare Disorders, up to 2% of Americans suffer from Wernicke-Korsakoff syndrome, which is a complex form of dementia caused by chronic deficiency of Vitamin B1, which is also known as thiamine. Symptoms include memory loss, confusion, lethargy, and even delirium and coma.

Alcoholics between the ages of 30 and 70 make up the largest group of Wernicke-Korsakoff patients, because alcohol interferes with the way the body uses and stores Vitamin B1. However, people who have severe B1 deficiencies for other reasons can also develop the condition. At-risk groups include people with anorexia, cancer, HIV/AIDS, and some stomach and kidney diseases. NORD says scientists think there may be genetic risk factors that make some people more likely than others to develop Wernicke-Kosakoff syndrome, but so far no clear genetic link has been found.

Unlike the dementias we’ve already mentioned, Wernicke-Kosakoff dementia can be at least partially reversed if it’s caught early enough and if the patient can follow through with ongoing treatment. Treatment for Wernicke-Korsakoff includes daily B1 injections, complete avoidance of alcoholic drinks, better nutrition, and psychological therapy to deal with underlying causes such as anorexia or alcoholism.

A buildup of cerebrospinal fluid in certain parts of the brain can cause a condition called “normal pressure hydrocephalus” that causes dementia, difficulty walking, and bladder-control problems. Normal pressure hydrocephalus (NPH) can be hard to detect because most people who develop it are between age 60 and 80, and NPH shares symptoms with other types of dementia.

A 2011 study of two sisters with NPH reported in the Canadian Journal of Neurological Sciences found that each woman had the same set of protein alleles on her 19th chromosome, which indicates there may be a genetic role in at least some cases of NPH. Most of the time, there’s no known cause, although infections and bleeding into the brain cause some cases of NPH.

The only effective treatment for NPH is surgery to place a shunt in the brain to drain the extra fluid; in some cases, patients’ ability to walk improves post-surgery. The Alzheimer’s Association says that cognitive and bladder problems “are less likely to improve.”

What if your parent or grandparent has hereditary dementia?

If a parent or grandparent is diagnosed with a hereditary type of dementia, it’s important to understand the family’s risk factors. Genetic counseling can help adult children and grandchildren understand how their genes affect their risk, what signs and symptoms to watch for, and what tests and treatments are available. In some cases, you and your family may have the option to participate in genetic research.

Senior care for those with dementia and Alzheimer’s

SeniorAdvisor.com has ratings and reviews for many Alzheimer’s senior care communities that can also be a good environment for those with other types of dementia. Call toll free 1-800-805-3621 to speak with a local care advisor who can help you explore the dementia-care options in your area.

What Is a Terminal Illness?
10 Financial Resources for Seniors