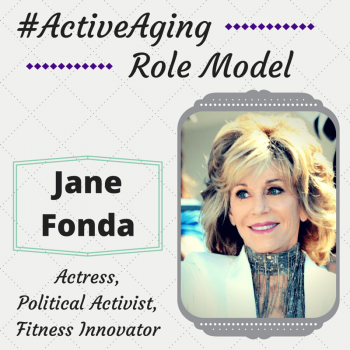 If you’ve ever thought that getting older meant that your professional life had to come to an end – or that it was too far gone to be resurrected – you only have to look at our Active Aging Role Model Jane Fonda for a perfect example of a successful career reboot.

Fonda is an actress, writer, political activist, former fashion model, and fitness innovator. She has won two Academy Awards and been nominated for five others, sold more than 17 million copies of her 1982 exercise video, received two Tony nominations, four Golden Globe Awards, and an Emmy for her TV work.

Fonda started her acting career on Broadway in the 1960’s play, There Was a Little Girl. That decade, she would transition into a very successful film career. Her most-acclaimed pieces of work include:

When she officially retired from acting in 1991 at the age of 54, she most likely envisioned slowing down and enjoying life with her newlywed husband, billionaire media mogul Ted Turner. But one decade later, Fonda would divorce Turner and return to her acting roots, stepping on the Broadway stage for the first time in 45 years, and acting in her first film in 15 years.

While those absences might have been daunting, Fonda proved that her acting career was one of those things that does indeed get better with time. Her more recent roles have aligned her with the younger generation of Hollywood starlets – like Jennifer Lopez in Monster in Law and Lindsay Lohan in Georgia Rule – but Fonda has held her own with style, grace, and a sharp, comedic wit. Her return to Broadway earned her a Tony nomination, while her role on an HBO series earned her two Emmy nods. And to top it off, she released five new exercise videos between 2010-2014, aimed at the older demographic still interested in staying fit and toned with lower impact.

While her past Vietnam-ear political activism left some Americans divided, her more recent work is less decisive but still very important. Fonda has in fact far from left the philanthropic arena. For example, The Women’s Media Center is focused on diversifying the media landscape to help promote under-represented female perspective, something organizers feel is critical to the health of the U.S. culture and democracy. Fonda is also active in the Georgia Campaign for Adolescent Power and Potential (GCAPP), the Thomasville Community Resources Center (also in Georgia), and the “VDay” global movement to end violence against women and girls.

Jane Fonda proves to us that true talent does not have to be put away once you reach your golden years; instead it can evolve and continue to be personally fulfilling and recognized. By not letting your age hold you back, you may come across new and interesting ways to employ your skills and passion, even far into life.

Get FIT with Jane Fonda – here is one of her new exercise videos!