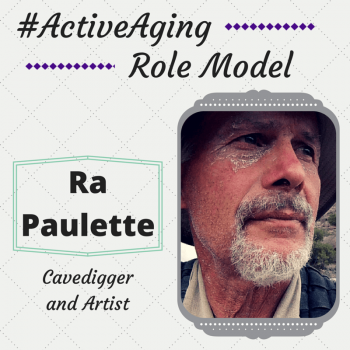 In the depths of the beautiful but barren desserts of northern New Mexico hide some of the world’s most intricate and surprising manmade works of art, all hand-dug by Ra Paulette, age 75. For the past 25 years, Paulette has been on a mission to not only express himself but to create tranquil, shared spaces for others to experience… all below the earth’s surface.

Using only basic hand-tools and accompanied only by his dog, Paulette spends hours digging, hauling, carving, and moving, leaving behind towering earthen walls, hand-carved into intricate patterns or large frescos, complete with seating areas, bedrooms, bathrooms, and pools. Despite having no formal training in art or structural engineering, his self-titled “wilderness shrines” often feature skylights, tiled elements, towering sculptures, and even running water. Much of his work is comprised on homes he’s been commissioned to build, even though these projects often take up to two years. And since he only charges around $12 an hour, the final projects are truly a labor of love.

What Inspires Ra’s “Dance of Digging”

When asked in a recent CBS Sunday Morning interview if he is obsessed with his cave-digging projects, he responds, “Would you call a child being obsessed with play? You wouldn’t use that word ‘obsessed.’ You know, when you’re doing something you love and are drawn to it, you want to do it all the time.”

So how does a man at his age, working alone with only simple tools, manage to create such impressive structures? On his website, Paulette explains that this type of manual labor is actually central to his self-expression. He believes it is a “whole-person” activity that engages both the mind and the body.

“When digging and excavating the caves, I break down all the movements into their simplest parts and reassemble them into the most efficient patterns and strategies that will accomplish the task while maintaining bodily ease,” he explains. “I’m fond of calling this ‘the dance of digging,’ and it is the secret of how this old man can get so much done.”

Paulette’s story, previously unknown to most outside of the local New Mexico area, was recently brought into the spotlight through an Academy Award-nominated film called Cavedigger. Director Jerry Karoff followed Paulette for three years as he worked on various cave sites, many commissioned by local residents wanting unique homes or “livable art.” The film also follows Paulette as he forgoes all commission projects to begin work on his “final” and self-proclaimed most important project, a 10-year “magnum opus” called the Luminous Caves.

Paulette hopes these caves – the largest project he’s ever undertaken – will be a meeting place for all sorts of religious ceremonies, meditation, weddings, and general connections with Earth and other humans from all types of cultural and socio-economic backgrounds. He sees this final project as a “social artwork” and a chance to not only showcase every technique he has learned over the past two decades, but to motivate visitors to make the world a better place by connecting them to something he feels is sacred.

“Changing the world is a tall order. Art doesn’t attempt to force change through direct action, but to catalyze it by affecting the emotional basis from which change can occur,” Paulette explains on his website. “When, through wonder and the sense of beauty, we move from the emotional realm of our desires and fears to the more expansive and deeper feelings of thanksgiving and appreciation of life … our actions will automatically be modified, creating a better world.”

See Ra in action and watch the trailer for Cavedigger:

Do you have an #ActiveAging role model you’d like us to feature on the SeniorAdvisor.com blog? Let us know in the comments!