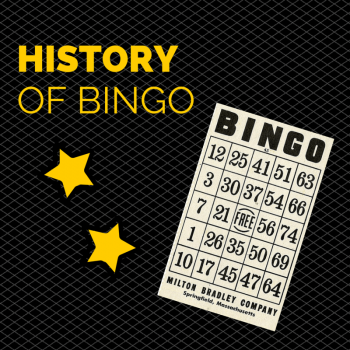 You can almost always find a bingo game at your retirement community. But have you ever wondered where it came from? Learn more about the fun history of bingo.

The Italian Origins of Bingo

Bingo evolved from “Il Giuoco del Lotto d’Italia,” a game played in Italy around 1530. It has since transformed across Europe and aided in the delivery of academic lessons with little ones. It is still used for educational purposes today in America to teach children and to teach English as a second language. In 1778 the French developed Le Lotto with a twenty-seven space card of three rows and nine columns. It is thought that this is the game which led to the modern five by five Bingo card.

Bingo in America was originally a carnival game. Hugh J. Ward made it popular while working in western Pennsylvania and Pittsburgh in the early 1920s. He copyrighted the game and wrote the rulebook in 1933. Edwin Lowe, a toy merchandiser, ran into the game in Atlanta in 1929 at a traveling carnival. They were using dried beans and calling the game “Beano” but using Ward’s rules. Lowe took the game back to New York with him where he found his friends just as fascinated by the game as the carnival revellers had been.

Lowe claims that one lady was so excited at winning that she called out “Bingo” instead of “Beano.” But the word Bingo had been used in Britain since the eighteenth century and had been used in Pennsylvania since around 1900. Lowe mass-produced the Bingo game and it became a wild success. By the 1940s everyone in America was playing Bingo. It is a tribute to the game that its popularity is still strong today, even with all the entertainment choices we have now have.

Bingo has become very popular across the United States, with the gambling laws in each jurisdiction controlling how it is played (and won) in each distinct area. Cards can be of paper, card stock, plastic with movable number covers, even electronic. Whatever their form, these simple cards call millions of people out to their weekly games.

The cards are five by five with numbers 1-75 arranged beneath the letters that spell Bingo. There are dozens of patterns that can be used to vary the game, from one number match to blackout, matching all numbers on the card.

Just because you hear, “Bingo!” doesn’t mean the game is over. The numbers have to be checked for accuracy before the game is over and a winner declared. This is serious business to Bingo fans. Then another game is immediately begun, another chance to win.

Bingo is so popular that Bingo paraphernalia has been developed. Special markers, called daubers, are standard. But lucky rabbit’s feet and other lucky charms are common. Special cups for drinking coffee while playing feature funny sayings, canvas Bingo tote bags, troll dolls, Bingo seat cushions and magnetic chips and a magnetic wand to pick them up.

Dos and Don’ts of Dementia Care
Holiday Crafts for Seniors