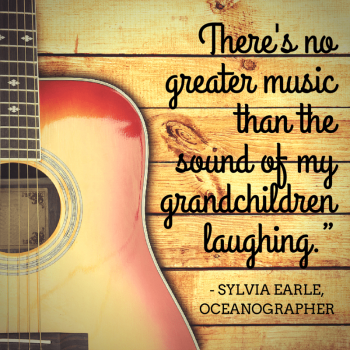 Today’s grandparents are a unique breed, living longer and staying more active than any generation before them. Whether you retire to Florida to play golf, move to the city to help care for your grandchildren, or keep working, there’s no one right way to do grandparenting these days. But grandmothers and grandfathers seem to agree that the role of grandparent—no matter how they choose to play it—is one of the most special experiences of their lives.

After the hard work of raising children, grandkids can be a sweet reward, and the payoff starts as soon as they arrive. Novelist Judy Blume fell in love with her grandson Elliot, now grown, at first sight. “We bonded the day he was born. I swear, he looked right into my eyes and there was a bond there.”

As grandkids grow and start to show off their personalities, their grandparents are often reminded of the past. Actress and author Julie Andrews described seeing the similarities bloom between generations. “The minute you become a grandma, you’re a changed human being. It is such a joy. It’s also something about seeing the passing on off genes. One of my grandchildren is so like my mother as a child it’s uncanny. And you think, ‘Gosh, how did the genes know to do that?’”

Sometimes the locally grown, organic, heirloom-variety apple doesn’t fall far from the tree. Domestic tastemaker Martha Stewart found delight in her grandkids’ culinary preferences when they were just toddlers. “They love good food! They love cacio e pepe pasta. They like mushrooms. They like caviar.”

Even the simplest things take on more meaning with grandchildren. Oceanographer Sylvia Earle, a former NOAA Chief Scientist, has had amazing experiences during her 40+ years as a deep-sea explorer. Still, she said, “there’s no greater music than the sound of my grandchildren laughing; my kids, too.” 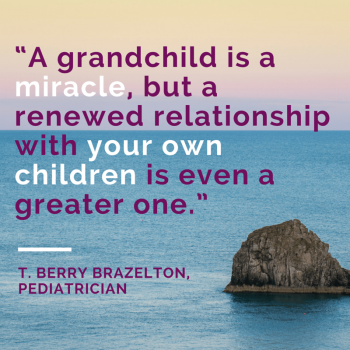 It’s not surprising, then, that some grandparents consider their grandchildren to be their crowning achievement. Actor and comedian Bob Newhart has won numerous awards in his long career, including 3 Grammies, but says, “I’m most proud of the longevity of my marriage, my kids, and my grandchildren.”

Many grandparents relish the special role they play in their grandkids’ lives. Marian Robinson, mother of First Lady Michelle Obama, is the first grandmother-in-residence at the White House since Mamie Eisenhower’s mother lived there. Mrs. Robinson stays away from the spotlight to focus on Malia and Sasha. “One of my biggest blessings is getting to see my granddaughters grow up before my eyes. My job here is the easiest one of all: I just get to be Grandma.”

What the late columnist and essayist Erma Bombeck wrote in her book At Wit’s End about grandmothers applies to grandpas, too. “They occupy such a unique place in the life of a child. They can shed the yoke of responsibility, relax, and enjoy their grandchildren in a way that was not possible when they were raising their own children. And they can glow in the realization that here is their seed of life that will harvest generations to come.”