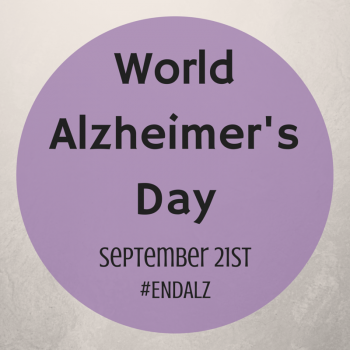 Show your support by sharing this image on Facebook. Spread awareness to #ENDALZ!

It’s important for certain days of the year to be recognized. Whether it’s a holiday to keep tradition or a day dedicated to raise the awareness of the importance of a certain key issues like health and wellness. September 21st is recognized as World Alzheimer’s Day.

What is Alzheimer’s Disease?

Dementia is the term used to specify the brain disorder that is directly correlated with affecting the memory, behavior, emotion, and thoughts of a brain. Alzheimer’s disease is very closely related to dementia since Alzheimer’s, more often than not, is the cause of dementia. As one can imagine, a life with a brain disorder like this would cause one to need help, and since there’s no cure, a day supporting further research and discovery of this unfortunate disease, is a grassroots effort to help raise awareness. Let’s take a close look at the disease and the special day that calls attention to it.

This disease affects emotion, thoughts, and memory of the brain, as well as other frontotemporal dementia and vascular diseases. This problem is growing in numbers worldwide, but the numbers in the United States expect to quadruple by the year 2050. Currently, there are about 44 million people living with dementia around the world. At this time there is no known cure for this tragic disease that affects our loved ones. The early onset signs of dementia include: hardship when performing simple tasks, issues with language, memory loss, as well as any noticeable changing in the person’s personality.

How World Alzheimer’s Day Got Started

The United States especially calls attention to this matter considering it’s the sixth-leading cause of death in the country and one of the top ten diseases that happens to be incurable. Baby Boomers are greatly affected by this disease. It’s often referred to a the “family disease” since it’s an ongoing decline of a family member causing everyone in the family to be affected due to the stress and emotions involved with living with someone who has this disease.

Alzheimer’s Day is held on September 21st as this is the day it was launched in Edinburgh at the Alzheimer Society of Ireland’s yearly conference. This is a worldwide effort in discovering more about this disease and getting it more attention.

How You Can Help

By spreading awareness about this issue, you can help your friends and family become better educated about early warning signs and learn how to handle potentially harmful situations. Having a resource you can count on, like a local chapter, will give you the tools you need to navigate through this time.

Make sure to participate in Alzheimer’s Day, if possible, by donating or attending local events during the month of September. You can wear purple on that day and join a local chapter in their fundraising events. Some chapters will have walks and runs to raise awareness during this time. Consider becoming a volunteer for the event and help with the registration table.

Spread the news about Alzheimer’s, early warning signs, and help others see how to keep communication channels open with their families. Learning about the illness and how to cope is a great way to be prepared and to help others out at the same time. A great way to start is by sharing this post with your friends on social media – perhaps you’ll inspire them to donate to fund Alzheimer’s research or to sign up for a Walk to End Alzheimer’s in your town!

How to Choose an Executor
Healthy Aging Month