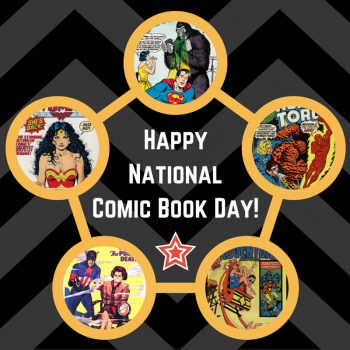 In honor of National Comic Book Day on September 25, we’ve collected five of our favorite vintage comic characters from the “Golden Age of Comic Books” (late 1930s to early 1950s). Is your favorite on this list? Comment below to let us know!

We can’t have a list of top comics without Superman, a character who not only kicked off the Golden Age of Comics with his appearance in Action Comics #1 in 1938, but who would go on to make a mark in radio, television, and movies for decades to come. His powers and villains have evolved over time (for example, his ability to fly was introduced in the 1940s), and his backstory edited and revised (for a while, there were two Supermans existing in parallel universes of the 1940s and 1960s), but generations of comic book readers have known and loved the Man of Steel for more than 70 years.

Although never a commercial hit, Plastic Man is another favorite of the 1940s. A bad-guy-gone-good after being doused in an unknown chemical that gave his body all the properties of rubber, Plastic Man’s adventures were known for their quirky, offbeat structure and surreal slapstick humor. In his original incarnation, Plastic Man eventually became a member of the city police force and then the FBI. His character was later revived by DC in the 1960s, after 10 years of dormancy.

Who punches Hitler? That’s right. First published a year before the attack on Pearl Harbor but a full year into World War II, Captain America was a patriotic super-soldier who fought the Axis powers. Created as a purely political character before the U.S. was actively involved in the war, many people actually protested and disagreed with the character, enough to require police protection outside of the artists’ New York office. Today, he is seen as one of the top comic book characters of all time, and is enjoying a revival with recent “Avengers” films.

First appearing in 1939, the “Human” Torch was actually an android  that possessed the ability to surround himself with fire and control flames. In his earliest appearances, he was portrayed as a science fiction monstrosity, but later became a hero. Although he was one of the first superheroes to headline a solo title, he later fell into obscurity by the 1950s and was recycled a decade later in human form. Like others in his era, he battled Axis Powers, but he went on to join the NYPD force. He often fought his nemesis, the Sub-Mariner.

A princess of the Greek Amazons, Wonder Woman also battled many Axis powers during World War II.  First published in 1942, the Wonder Woman title has been published by DC Comics almost continuously except for a brief hiatus in 1986. She possessed a wide range of superhuman powers and battle skills, along with an arsenal of weapons, including the Lasso of Truth, a pair of indestructible bracelets, and, in some stories, an invisible airplane. Interestingly, she was actually created by American psychologist William Moulton Marston (who also invented the polygraph) as a character that would conquer “not with fists but with love.”