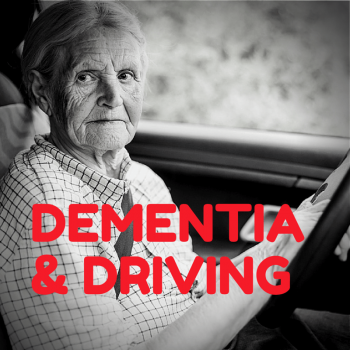 In most of America, driving is equal to independence. Teenagers look forward to getting their first driver’s license because they will then have freedom of movement – at least when they’re allowed to use the family car. Seniors often fight long and hard before giving up their driver’s license. It is a significant milepost in the effort to maintain their independence and they don’t want to be a burden on others.

The Onset of Dementia

The first diagnosis of mild dementia does not have to mean the end to driving, but the senior diagnosed should begin to think about giving up driving, because it will come sooner rather than later for her. Dementia is a progressive disease; it slowly gets worse and there is no cure for it at this time. Treatment may slow down the progress of the dementia, but it cannot be reversed. Because the progress of the disease varies from one person to another, there is no hard and fast rule for how long the person diagnosed with mild dementia can continue to drive safely.

There are some behavioral signs in daily life that can tell you when it is becoming unsafe for your senior with dementia to drive. If they are becoming lost in a familiar space, are losing the ability to judge space and distance, or are less coordinated it may be time to talk about giving up driving. If they are less alert, tend to fall asleep, have trouble making decisions or have mood swings, driving could be unsafe for them and others. If they have trouble multi-tasking or processing information, or need reminders about personal care, it may be time for them to hang up the car keys. And if you are still in doubt, consider getting an independent driving evaluation.

Living with Alzheimer’s or Dementia

Dementia and Alzheimer’s disease are progressive diseases of the brain. Doctors say that by the time families have noticed enough signs to bring it to the doctor’s attention, the disease has already been present for months. Often the senior’s ability to locate themselves or objects in their environment is distorted, as when they try to sit down and miss the chair. This would interfere with estimating distances, like the distance to a stop sign at the corner. There can be a constant noise in the heads of dementia sufferers that they describe as many indistinct voices and sounds all at once, This could interfere with hearing horns, sirens of police or emergency vehicles.

Be sensitive when you sit down to talk about giving up driving. It’s a conversation you will have to have more than once. Appeal to the senior’s sense of responsibility – they wouldn’t want to be the cause of someone getting injured or killed in an accident. Together you can look for alternate ways that they can make their routine weekly trips to the store, book club, or church with friends, on public transportation or by taxi. And through all of the discussions reassure the senior that you love them very much and are concerned for their safety and well-being.

Related articles: How to Tell Your Aging Parent to Stop Driving