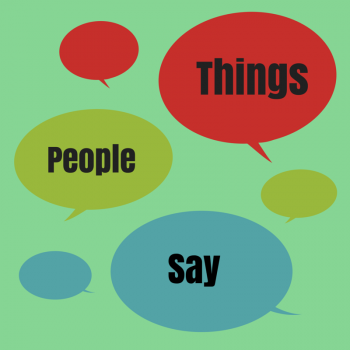 “Consarn it!” one of my friend’s grandfathers used to say. He rarely cursed and this was as close as he got to it. It seemed like a funny expression to me. Now when my mother talks to young people, they think she has some funny phrases.

It’s surprising the staying power of some slang expressions. My mother is still cool when she says, “Cool,” even among the teenagers. This word has been around for decades though I’ve never heard my grandma (who is in her 80s) say this word. Even language specialists don’t know what makes one slang expression survive for generations and others disappear after only a year or two.

My mother used to say “Neat” or “Bitchen” – as young people we would lovingly look at her as though she was a dinosaur. Bitchen may have been popular in 1945 and again in 1965, but it hasn’t been popular since then.

When her friends used to ask her, “Get it?” she always did. No one had to tell her to “Get with it!” They even played around with this quick dialogue: “Get it?”

Nobody gets her anymore. But she can still dig it!

Back then, when there was a part of a car or other machinery and you didn’t know what to call it, you could always fall back on dingus, frammus, or thingamabob. These are distinctly low tech words that the youth of today want nothing to do with.

Today’s Boomers got their kicks on Route 66. But when today’s teens say that they are “Kickin’ it,” they mean that they are relaxing.

“Slang establishes membership in a group,” according to linguist Tom Dalzell.

Having spoken to a few older friends, a few of their responses were: “I’m definitely not part of the group that is “Kickin’ it,” but I do it every day after lunch when I have a chance. I call it, “Siesta,” or a nap.”

Another elderly friend commented, “If I tell one of the grandkids that they look like a really cool helpcat, they think I’m square. That’s not what they say, but I know that’s what I used to say. When I tell them their drawing is weirdsville, they look at me wondering what I mean. If I tell them to cool it, they sometimes will “chill” – their word, not mine. But at least it has a similar meaning. If we were having a gas (a fun time) nobody wanted to book it or to bug out. We would hang around the bash until the wee hours. But I don’t know about this younger generation. I can hack it, but I’m not sure they can.”

Amazing how slang words can help steer a great conversation around the dinner table. The next time you find yourself searching for things to talk about with your loved one, try asking about what slang or hip words they used while growing up! Chances are they’ll not only tell you the key words that were in style, but they’ll also dive into some amazing stories about their past that revolved around those phrases and key words.

What to Include in Your Will
Wheelchair Decorating Ideas