SeniorAdvisor.com Blog > Blog for Families > Senior Health & Fitness > What is a TIA?

What is a TIA? 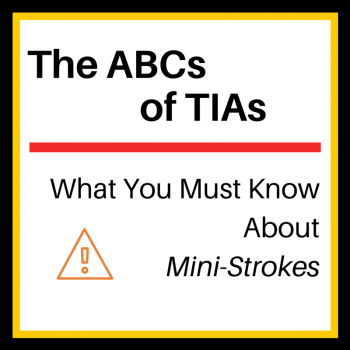 Most of us know a stroke is a medical emergency that requires a 911 call, but not everyone knows what to do about so-called “mini-strokes” or TIAs (transient ischemic attacks). TIAs have the same symptoms as strokes — facial drooping, limb weakness, and speech impairment — but unlike a full-blown stroke, TIA symptoms disappear after a few minutes or hours. That leads some TIA sufferers to underestimate how serious a mini-stroke is, and what it means for their risk of a major stroke.

A mini-stroke is a big deal

Mini-strokes are medical emergencies, doctors say. Any time you or someone you know has stroke symptoms, it’s time to call 911 and go to the hospital, even if the symptoms go away on their own. This is a situation where it’s far better to be safe than sorry.

That’s because TIAs and ischemic strokes are caused by the same thing — a blood clot that blocks circulation to part of the brain. The difference is that during a TIA the clot dissolves on its own, whereas doctors must intervene to remove or dissolve the clot during a major stroke to prevent disability or death.

Research has shown that a person who has a TIA has a 40% chance of going on to have a major stroke — and half of those people will suffer that major stroke within a week of the TIA. Because strokes and TIAs have the same symptoms, TIA patients who later suffer a major stroke may lose valuable treatment time waiting to see if their symptoms will disappear on their own. Doctors have clot-busting drugs that can help reduce the severity of the most common type of stroke, but the treatment is only effective within the first three hours.

Even among the 60% of mini-stroke sufferers who don’t go on to have a major stroke, a TIA is a sign that something is wrong, because a blood clot has found its way to the brain. The National Stroke Association says the most common TIA causes are:

All of these causes can indicate atherosclerosis, a buildup of fatty plaque inside artery walls due to high cholesterol levels in the blood. Other conditions that increase the risk of TIAs and major strokes are diabetes, high blood pressure, heart disease and defects, and arterial disease. Proper diagnosis and effective treatment can reduce the risk of more TIAs, strokes, and other health problems.

Think FAST during a TIA

The American Stroke Association uses the acronym FAST to describe the most common sudden-onset symptoms, and what you should do:

Other sudden symptoms can include dizziness, partial or complete vision loss, and severe headache. Don’t wait to see if the symptoms go away. Whether it’s a TIA or a major stroke, doctors say the emergency room is the safest place to be.