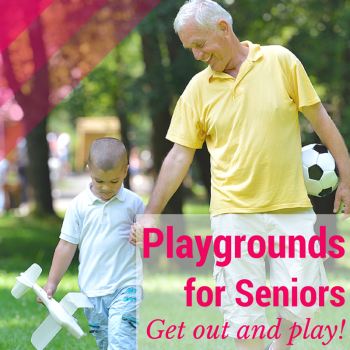 When was the last time you spent the afternoon at the playground? If you live near one of the growing number of senior playgrounds, the answer might be yesterday or even today. Geriatric and fitness researchers have found that outdoor fitness stations tailored to older adults can help people stay active, social, and healthy. Playground gear for grownups is designed to help with joint mobility, balance, and strength for daily activities such as standing, sitting, and walking up and down stairs.

Even better for older adults who are taking care of grandchildren, some senior playgrounds share space with playscapes for kids, giving caretakers a chance to flex their muscles and supervise while their little charges burn off some energy.

A short history of senior playgrounds

Japan, with its large senior population and low birthrate, was an early innovator in senior play spaces. Since 2004, the city of Tokyo has opened “nursing care prevention parks” that offer specialized gear and hosted classes on how to make the best use of the equipment. In some areas, Japanese parks are being converted from kids-only playgrounds into parks with play gear for all ages.

Residents of Beijing can enjoy a workout at one of the city’s thousands of outdoor gyms, many of which were built in preparation for the 2008 Olympic Games. The gyms are designed for multigenerational use. Other countries that have implemented senior or multi-age playgrounds include Finland, Denmark, Germany, and the UK. Canada’s Riverside Fit Park in the British Columbia city of Courtenay features a surfboard station for balance, an outdoor elliptical trainer, and massage equipment.

Senior playgrounds in US cities

Senior playgrounds are starting to pop up in US cities, too. Houston suburb LaMarque opened one in August 2014, creating a fitness zone where older adults can practice and improve their balance, strength, and coordination. Features include a walk-beside zig-zag pipe with a handheld ring that helps maintain shoulder mobility, a bench and bar for sitting and pushing up, steps and a ramp for walking and leg strength, a low balance beam, and modified chin-up bars.

Last year the city of Modesto, California, allocated funds to build a similar park near a senior housing community. Senior playgrounds are already in place in Springfield Township, Ohio; Sanford, Florida; and San Antonio, Texas along with other cities.

In many places, senior playgrounds are developed alongside senior centers, community centers, or existing playgrounds for multigenerational play. Often, city parks departments oversee the planning and funding. US-based senior play equipment makers include Xccent, which produces a line of equipment developed in Finland.

Health company Humana and playground non-profit KaBOOM! built 8 multigenerational playgrounds in late 2014 designed for children and adults as part of an annual volunteer program. KaBOOM! provides grassroots-action and playground-building toolkits on its site for community members and leaders to use in developing their own multigenerational playgrounds. Building or converting a playground for adult use is a big project, but the reward is a healthier, more socially active population at all ages.

What is a Bridge Loan?
How to Make an Emergency Kit