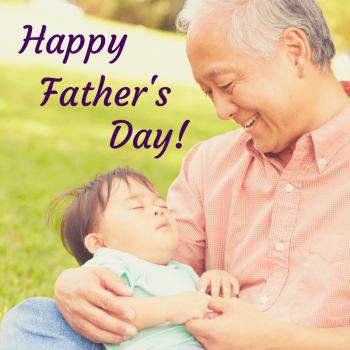 In the United States the first Father’s Day was a one-off event held in a West Virginia Methodist church on July 5, 1908. It commemorated the 250 fathers who had died in a mining accident the previous December. They left behind nearly a thousand fatherless children. It was sincerely hoped that this type of tragedy would never happen again.

But just the following year, in 1909, Sonora L. Smart Dodd was inspired during a Mother’s Day sermon to honor fathers, too. Her mother had died when she was sixteen years old and her father, William J. Smart, a Civil War veteran, had raised his six children on his own. From her home in Spokane, Washington, Ms. Dodd championed the idea to celebrate fathers just as Anna Jarvis championed Mother’s Day with the help of John Wanamaker and his retail stores. Mrs. Dodd’s first celebration of Father’s Day was on June 19, 1910 at the Spokane, Washington, YMCA. While Mrs. Dodd pushed for June 5, her father’s birthday, the ministers needed more time to prepare sermons and postponed the event until the third Sunday of June.

While the general population supported the idea of a day honoring fathers, retailers did not see much potential for profit in the idea. People get very sentimental about their mothers and therefore spend a lot more on Mother’s Day than they do on Father’s Day.

President Calvin Coolidge had hoped to create a national day to appreciate fathers and commented that it would, “establish more intimate relations between fathers and their children and to impress upon fathers the full measure of their obligations.”

William Jennings Bryant, among others, was a staunch proponent and in 1924, President Calvin Coolidge recommended that Father’s Day become a national holiday; however, no official action was taken. In 1966, Lyndon B. Johnson, through an executive order, designated the third Sunday in June as the official day to celebrate Father’s Day but it still wasn’t a national holiday. That didn’t come until 1972.

Father’s Day is celebrated in many countries around the world, sometimes on the third Sunday in June, sometimes on other dates. If you are blessed to still have a father who is living, give him some appreciation this Father’s Day. Perhaps consider taking him out to a movie, going fishing together, or helping out with some yard work. Yes, yard work is always appreciated!

My all-time favorite thing to do on Father’s Day is to have all the family together for a barbeque. My brother is fairly good at making ribs and my dad is an expert in making steaks.

What is your favorite thing to do for Father’s Day? What types of traditions does your family do for this holiday?

What Does a CNA Do?
LGBT Senior Services in Portland